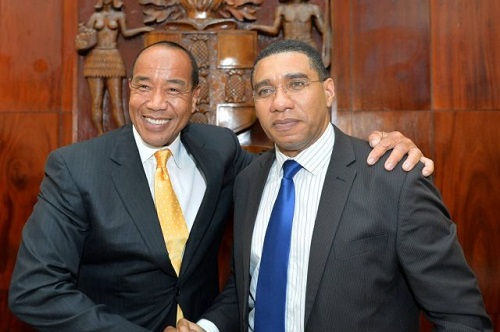 Kingston, Jam, September 28, 2016 – Prime Minister, the Most Hon. Andrew Holness, says Jamaicans are buying into the vision of the Economic Growth Council (EGC) and its push to generate sustained levels of economic growth.  The Council, chaired by businessman Michael-Lee Chin, is targeting gross domestic product (GDP) growth of five per cent over the next four years.  The Prime Minister, who was speaking in an interview with Bloomberg Radio’s Carol Masser in New York last week, said the EGC aims to “mobilize national support around a…new paradigm of economic development.”  “It is taking (shape) in the minds of Jamaicans, that we have to take a new approach to our economy,” he pointed out.

The EGC’s Deputy Chairman, and Ambassador for Economic Affairs, Dr. Nigel Clarke, who accompanied Mr. Holness, noted that among the areas of focus is creating an environment in which capital, labour and technology “become more productive.”  “One of our views is that the role of Government is to facilitate and create the enabling framework that allows thousands of businesses and hundreds of thousands of workers to pursue their own interests and, therefore, expand opportunities,” he noted.

The Prime Minister was in New York from September 19 to 24, where he attended the 71st United Nations General Assembly (UNGA). He also did an interview with Bloomberg television.  The Prime Minister’s engagements included his inaugural address to the UNGA on September 23. He also witnessed the delivery of US President Barack Obama’s eighth and final speech to that body on September 21.

Related Topics:Economic Growth CouncilJamaicans buying into the vision of the EGC
Up Next