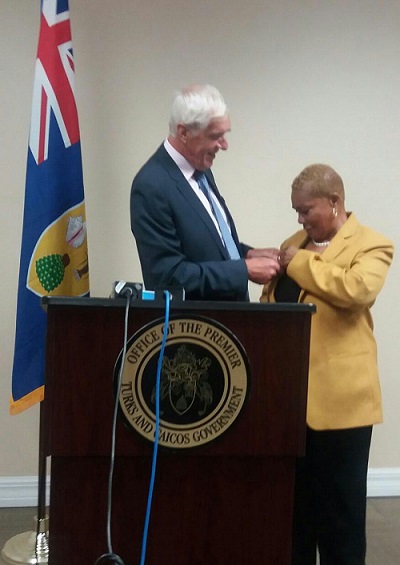 Providenciales, TCI, September 29, 2016 – The Governor, Peter Beckingham, presented the award of the British Empire Medal on behalf of Her Majesty the Queen to Mrs Rita Gardiner for her services to sport and women in the Overseas Territories, especially TCI, on 29 September.

At the presentation ceremony which was attended by members of Mrs Gardiner’s family and friends the Governor said:   “I am thrilled for Mrs Gardiner to receive this great distinction, and I am pleased to have the opportunity on behalf of Her Majesty The Queen to present this award to her.  Rita has made a big contribution to society in Turks and Caicos. She has been instrumental for longer than I know in raising our profile in sport, and for ensuring our rightful place in the region and the Commonwealth.  I saw first-hand in 2014 her enthusiasm for organising the Commonwealth Baton relay which landed in TCI on its way across more than 60 nations.  Her support for Delano Williams is fantastic, and it is clear from meetings with them both that our first Olympian has benefited from her advice, guidance and enthusiasm.  Rita travelled with Delano’s mother, with support from the Premier’s office, to Rio to watch Delano compete in the Olympic Games.

“Finally we should not forget the work Rita has done to improve the lot of women in TCI society. Her path-breaking work as Director of the Gender Unit has been important in raising the profile of women in society, and she has been actively engaged in striving to reduce domestic violence.  We should salute Rita for what she has achieved for TCI in sport and the promotion of women.  The Award of a British Empire Medal is a wonderful recognition of her work, and she and her family and friends should take great pride in this important honor.” 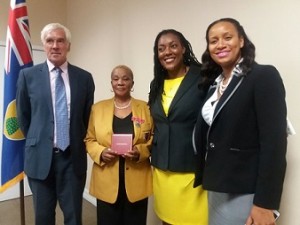 Commenting on her award, Mrs Gardiner said:   “I am honored and delighted to be a recipient of this Award by Her Majesty. Coming in the same year as TCI’s first Olympic athlete, my good friend Delano Williams, took part in the Olympic Games this is a big recognition of the strides we have made as a sporting nation competing on the world stage.  I am pleased to have played a part in that progress through my work with the Amateur Athletic Association and the Commonwealth Games Association.  I am pleased too that my work in helping to promote and safeguard the place of women in society is recognized with this Award.  This is an important and memorable day not only for me, but also for my wider TCI family. I am grateful for all the support I have received from so many people here and overseas.”

In addition to receiving the British Empire Medal Mrs Gardiner will be entitled as a member of the Order Of the British Empire to use a special chapel in St. Paul’s Cathedral for baptisms of grandchildren.  There is also a special service in St Paul’s in November for new members, and a Ceremonial Service in Spring 2017 to mark the Order’s Centenary.