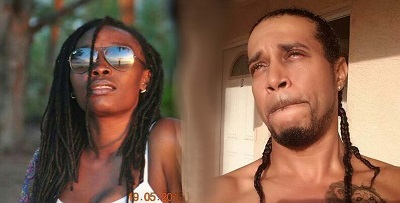 Providenciales, TCI, September 9, 2016 – Police have arrested the man they believe caused the death of the two killed in that vehicle collision last night on South Dock road; death by dangerous driving is how they describe the charge in a media statement late today.
It can only be called as shockingly sad; the traffic accident claimed the lives of two islanders, 26 year old Correll Glinton and her boyfriend, 33 year old Martin Field.
The pair was on Field’s scooter when they were struck by, of all things, a huge truck.
The white Nissan V8 Titan truck is seen in photos, mashed extensively at both the front and rear ends, and police say it was found in ditch at the site.  As badly as the truck was damaged, it was miniscule when compared to the mangled metal left of Martin’s scooter.
Police say the young man and woman were found lifeless, off the road and reports to our newsroom are that it was a gruesome scene.
Speed is often a factor and Police continue to warn residents about excessive speed while driving, and infamously the curvy and tricky to navigate South Dock road is where many fatal car crashes have happened over the years.
This time, a father of two who worked at Ports of Call and a pastry chef, originally of Grand Turk who was a part of the team at Grace Bay Resorts.
The man arrested, a 38 year old and very popular Turks and Caicos Islander, is still in custody; the report says he was taken to Cheshire Hall Medical Center before being held by Police.