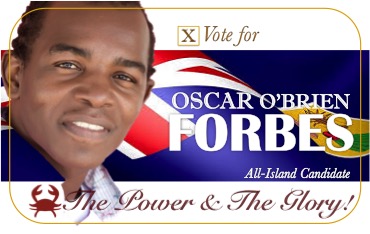 The man who has become a superstar MC recently decided to throw his hat into the very big pool of people contending for an at large parliamentary seat whenever the next general elections are called.
The announcement has admittedly been bitter sweet with lots of conjecture about what right Forbes has to offer, whether he has been in the Turks and Caicos long enough and whether his contribution and motives are properly piled up and placed.  From a voice note in wide circulation exposing a challenging call when he appeared on a popular radio talk show to a song, ‘Why You Call’, which last week debuted live at the Island Fish Fry; Obrien Forbes is seeing powerful pushback.
Nonetheless, the man is focused he says and in a video explained the impetus for his interest.
“This speaker is convinced that crime is a contributing factor to our country’s plummeting travel rating, because not even our tourist are exempt from the tyranny of lawless men, whom we seem are unable to deter.”

In a 10 minute video, Forbes articulates what is often the commentary by local political pundits and everyday people.

There will be more in this crowded All Island race… tomorrow the PDA announces candidates and later this month, a North Caicos man will officially make his intentions known.