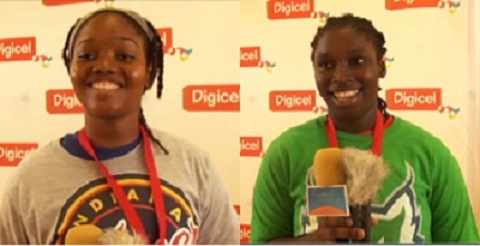 Providenciales, TCI, September 13, 2016 – Two young ladies were among the seven selected to go the British Virgin Islands at the completion of the NBA and Digicel Jumpstart program held here in Provo over the weekend.

It was a fitting finale and according to Trevor Cooke, Secretary General for the TCI Basketball Federation and a former player himself, the choices were made in consultation with local coaches and to wind it down to seven from sixty was tough, but fair.
“In my opinion they are the elite in terms of all the kids that participated, I think the prize was exactly what it needed to be, they’re getting to leave the Turks and Caicos and go to the BVI, not only in terms of seeing the BVI for the first time, but also in terms of representing out country, representing the clubs that they normally would be a part of.” – Trevor Cooke.
Shernaria Morris and Jahmich Hutchinson talked to us, demonstrating they are very poised and professional teen players.
“My name is Shernaria Morris and I had a great time at the NBA JUMPSTART and I’ve learned a lot and I’ve really take it further on into my future.”
“My name is Jahmich Hutchinson and I made it, and I would like to say thank you to all my coaches, my mommy and my daddy.  I’ve learned a lot, my footwork, my foot movements, my dribbling, my jump shot.”
Digicel says the group will leave for the British Virgin Islands in October.

Related Items:2 females selected to travel to BVI or JUMPSTART training, players getting ready to head to the BVI, Shernaria Morris and Jahmich Hutchinson