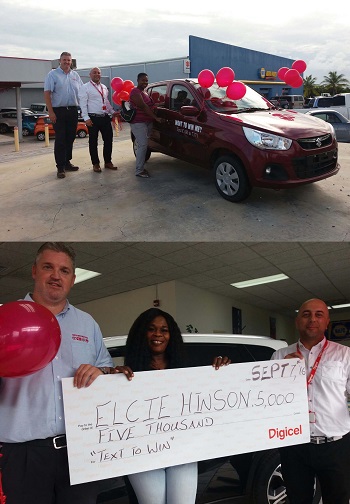 Providenciales, TCI, September 8, 2016 – Right about now, Pertmy Higgs of The Bight should be driving around in her brand new, 2016 Suzuki Alto thanks to the Text and Win 10th Anniversary promotion hosted by DigicelTCI.
Pertmy did not have much to say, but her winning smile and her dedication to the game earned her the grand prize which was presented to her at local Suzuki dealer, Bayview Motors.
Pertmy texted as many as 700 times per day in order to win the car, and she told media at that presentation held on Wednesday that her mission was to win and that she was not at all surprised by the call.
Digicel also presented a $5,000 cheque to Elcie Hinson of Leeward who said she will have some fun with about $1,000 of the money and save the rest.
The winner of $1,500, Gary Lightbourne was unable to attend the presentation, he is stationed for work in Salt Cay but still gets his cash.
It was in July that DigicelTCI marked 10 years in the country, this culmination of the anniversary event was deemed exciting by Digicel executives including Stephen Murad who was on site and James Schofield of Bayview Motors.