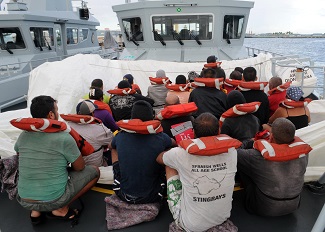 Shortly after 11:00 am Tuesday morning, 4 Cuban nationals were found on Cay Lobos on the southern border of the Great Bahama Bank approximately 12 miles north of Cuba. The second group of undocumented Cuban nationals consisting of 17 persons were found on Anguilla Cay in the Cay Sal Bank area approximately 150 miles southeast of Key West Florida shortly after 7:00 am early Wednesday morning.

The Cubans (18 male and 13 females) were taken into custody by crew members of HMBS A.D. Hanna and were transported to New Providence for further processing and investigation by Immigration officials.

Also this evening, Defence Force Marines stationed in Marsh Harbour apprehended a number of undocumented Haitian nationals off Hope Town, Abaco, around 6 p.m. this evening. The Migrants were aboard an American type sailing vessel. The Marines are currently carrying out boarding procedures, and details of the arrest are forthcoming.