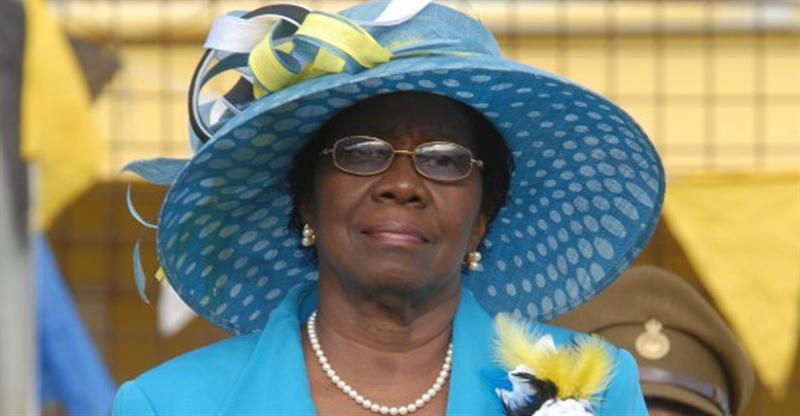 St. Lucia, June 2, 2016 – Dame Pearlette is to attend the official 90th birthday celebration of Her Majesty the Queen.

Her Excellency, Governor General Dame Pearlette Louisy is scheduled to leave the State on the evening of June 7 for the United Kingdom to attend activities planned for the official celebration of the 90th birthday of Her Majesty the Queen.

She will join other Governors General from the Queen’s realms for a service of celebration and thanksgiving at St. Paul’s Cathedral on Friday, June 10.

Other events include a special meeting for Governors General convened by the palace to discuss matters pertinent to the realms, a luncheon at Buckingham Palace  on June 10, and the Queen’s Birthday Parade–Trooping the Colour–on Saturday, June 11, the date of the Queen’s official birthday, held every year on the second Saturday in June.

Her Excellency returns to the State on Monday, June 13.

Meanwhile, Saint Lucia will, during the month of June, celebrate the 90th birthday of Her Majesty Queen Elizabeth II, Queen of Saint Lucia and Her other realms and territories, and Head of the Commonwealth.

Her Majesty Queen Elizabeth II has made an unwavering commitment to a lifetime of service which has spanned 65 years.

Saint Lucia will also have its own milestone event to celebrate–the 70th birthday of Her Excellency, Dame Pearlette Louisy, Her Majesty’s Vice Regal Representative in Saint Lucia, and her 19 years of service.

The Office of the Governor General has proposed to celebrate these two milestones at two main events–a service of celebration and a charity event.

The service of celebration will be held at the Minor Basilica of the Immaculate Conception on Friday, June 17 at 10 a.m. Her Excellency extends a special invitation to all who are able, to join her for the occasion.  She welcomes in particular the recipients of National Honors–the Imperial Honours (New Year and Birthday Honours) and the Order of Saint Lucia.  All are kindly requested to wear their medals and decorations.

The Charity Event, a Vintage Garden Party, will be held at Government House on Sunday, July 19, from 5 – 8 p.m.  At the heart of this fund-raiser lie three core themes which have been recommended for adoption across the Commonwealth: Charity, Community and Celebration. These themes are meant to create an opportunity for communities to maximize their fund-raising efforts to demonstrate their spirit of sharing  and caring  and to publicly  celebrate and honor extra-ordinary  commitment  to service in a fun, party environment.

The proceeds of the Vintage Garden Party as well as the collection  during  the service of celebration will support the work of local children’s charities.

the  Vintage Party is an adaptation  of a  fund-raiser called the “Patron’s Lunch” which will be held at Pall Mall in London, on June 12. The Patron’s Lunch at which 10,000 persons are expected to attend is sponsored by the British firm – Marks and Spencer.