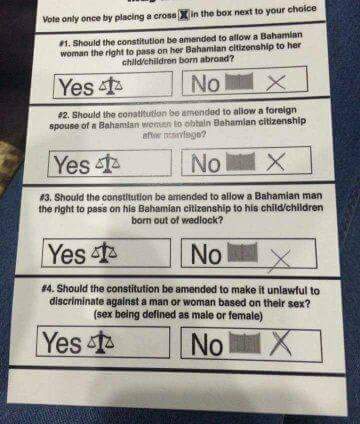 No, no, no, no – Bahamians yesterday overwhelmingly rejected the four proposed constitutional changes in the Gender Equality Referendum and sent the ‘Yes Campaign’ packing.
Voter turn-out was low, some say voter apathy was high and still Bahamian women will not have the same rights as Bahamian men when it comes to their children born out of the country or for their foreign husbands when it comes to citizenship.
Three questions in the referendum to many seemed reasonable, while the fourth was culturally questionable after transvestites and homosexuals launched their own public campaigns for equality.
Bahamians in large part either stayed away from the polls or rejected strongly the idea for same sex marriage. The Yes Campaign’s explanation that it was not about same sex marriage but equality was likely not believed.