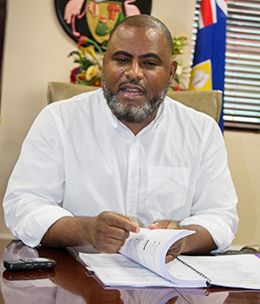 A meeting between the Minister of Border Control and the Haitian Consul to the country is expected to reduce how many Haitian sloops are coming in with illegals aboard.
Minister DonHue Gardiner said in addition to insisting on help from Haiti to stem the flow of their people, illegally, into the Turks and Caicos Islands there is a move to increase security measures.  It is common for illegal migrants to take the risk of fleeing Haiti just before the hurricane season revs up; though the Premier a few weeks ago confirmed that the TCI had been seeing a reduction in recent years.
Not so it seems for 2016, the Minister in a media release confirmed, “Three sloops were detected and intercepted within the last seven weeks of which two were intercepted within three days of each other. The combined total was 230 persons.
The staff at the Coastal Radar Station, the Royal Turks and Caicos Islands Police Force, the Immigration Department as well as all other front line and responding agencies are commended for their continued efforts in protecting the borders of the Turks and Caicos Islands.”
Of the 230 at least 12 are escapees from the Detention Center; and one boat made landfall with an unrecorded number of Haitians on board.
The Minister also reminded that ‘if you are caught providing assistance or shelter to an illegal migrant, you are subject to a fine of $20,000, four years in prison or to both and you could lose your status in the TCI.’
Magnetic Media has been informed that these illegal Haitians are likely lying low in the areas of Five Cays and Kew Town, Providenciales.

TCI Residents not affected by US ESTA Notice