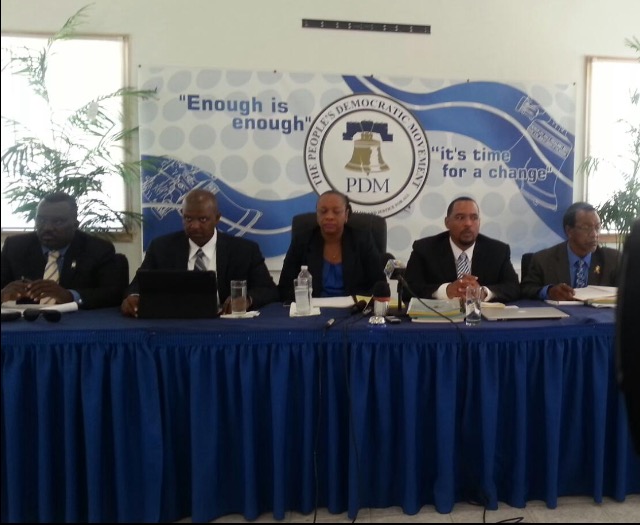 Full attendance from the People’s Democratic Movement when the opposition party held a press conference this morning announcing that if a General Election were called yesterday, they are ready; the PDM said, it is election season.

Doug Parnell, National Chairman: “We are seven months away from the date that an election must be called, and that would be November 12th, 2016, the House of Assembly must be dissolved by that day and an election date set. And so we’re here to put first of all our people in the mindset that we will be launching a campaign that addresses their needs and their concerns.”

From actual ideas for how to curb crime to challenges directed at the government administration on why practical suggestions like biometrics are not instituted to expressions of grave disappointment in the health care system and strong calls for greater transparency and accountability to demands for road works to come to forgotten Five Cays to exposes on wasted monies and unfulfilled projects and a rousing rally for a trade school to help in job creation; the PDM rolled out nearly two hours of issues to media at its headquarters on Monday morning.

Hon. Josephine Connolly: “We are ready to be the next government, and ready to make a significant change in the lives of our people. People are tired of this government boasting about the surplus, while many of our people are still in deficit. Our people continue to struggle.”

Media learned that Dwayne Taylor, former Member of Parliament, is the campaign manager and he announced a series of meetings which begin on Wednesday in North Caicos.

The PDM said that after four years of empty promises from the PNP, they believe the country is deserves their visionary leadership.