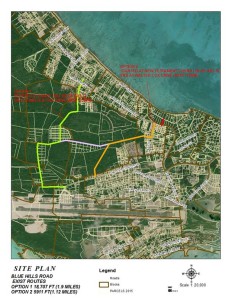 Re-engineering and another useful exit from the busiest part of the country, especially on school mornings, is believed to be the relief motorists have been pushing for, for years.

Specifically, the Ministry of Housing, Infrastructure and Planning says it will reconfigure the Blue Hills roundabout creating a left and right lane, to guide traffic out of the area in two directions on a broader road strip… no longer will drivers be stuck in one queue.

It was also explained that a road into Kew Town will be created for traffic headed south and toward the airport.

Minister Amanda Missick offered comment, “I am well pleased with the work completed thus far by the Public Works Team and look forward, as do the residents and visitors of Providenciales, to the finished project.”

Already, said Minister Amanda, phase one of the work has begun… phase two, she said will begin within 2016.