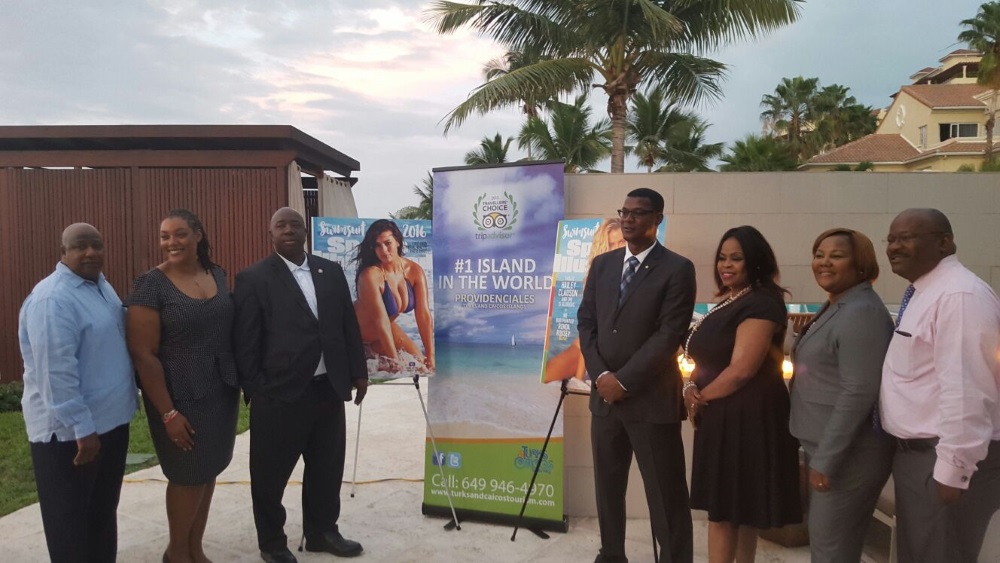 Providenciales, 17 Feb 2016 – Almost directly in sync with the Sports Illustrated Swimsuit red carpet event which was held last night in New York, the Turks and Caicos Islands Tourist Board hosted a local reveal at the Grace Bay Club for two of three covers of the extremely popular magazine; said to be seen by some 70 million Americans.

This year, SI Swimsuit has done some things differently, among them: the publication goes with three cover photos and this year SI Swimsuit features a ‘curvy’ model – moving away from strictly super slender figures.

Of the three cover photos, which were photographed in two different countries – the Turks and Caicos is the backdrop for two; an outstanding feat counted as a blessing by the country’s Tourism Minister, Hon Porsha Smith.
Hon. Porsha Smith, Minister of Tourism: “The only thing I can say actually, is to God be the Glory. I say that like that simply because, Turks and Caicos when He placed us, He put us in a very strategic location and the people that come to this country…”

Hailey Clauson and Ashley Graham are the beauties who made the cover cut; one on Grace Bay Beach, Providenciales and the other in Mudgin Harbour, Middle Caicos.

Anton Faessler, Chairman of Invest Turks and Caicos said he has already seen the promotional value on US television.

Anton Faessler, Chairman – Invest Turks and Caicos: “and the girl on the front page said, ‘we enjoyed our time in Turks and Caicos!’ (applause/cheering) That’s it and this goes to God knows, how many million viewers around the world.”

Grace Bay Club was home to the models and crew during their stay;General Manager Thierry Grandsire said the reviews on service by the people of the hospitality industry were raving.

The unveiling was done by Tourism Minister and Tourist Board Director and by Tourism Board Chairman and Premier Hon Rufus Ewing, who called this newest accomplishment for the TCI, priceless.

Hon. Dr. Rufus Ewing, Premier: “Being on the cover of Sports Illustrated Magazine, we could never afford it if we were to take it out as an advertisement. That goes to show you that your work and your service speaks for itself.”