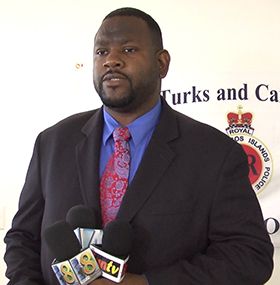 Providenciales, 05 Jan 2015 – Four men are arrested after alleged bad behavior which resulted from a robbery by gun point, a couple of stabbings and a couple of shootings, including one which Police have categorized as attempted murder.

Police obviously have their hands full with these investigations of use of bladed weapons and firearms according to Press officer, Audley Astwood, in a media release. On New Year’s Eve, a Blue Hills woman reported being robbed by gun point around 10pm; by Saturday a 20 year old male suspect was arrested.

On New Year’s Day, a fight near Caicos Royale Casino left a 25 year old man with multiple stab wounds. The man remained in hospital and Police report that Monday they arrested a 19-year old for the violent crime.

There was also a report from that incident of two shootings; in one case a 23 year old was shot in the upper arm – for that crime, Police say they have a 24- year old man in custody.

The second shooting, which drew the most serious of charges from Police happened on New Year’s Day in Five Cays. In the report it is explained that a 20 year old told investigators that he had just exited his car to check his tire when an unknown man fired three shots at him; one shot hit him in the head. The 20 year old ran to help and got it, amazingly, he survived the shooting and is recuperating at hospital.

For that near deadly shooting, Police have taken in a 26 year old man and have charged him with attempted murder. In this case, explained Astwood, there was a search of the man’s residence for evidence.

A second stabbing also happened on the first day of year, a 20 year old Blue Hills man who was wounded in the stomach has now been released after being treated at the Cheshire Hall Medical Center.

There was no arrest in that case … any information which could assist Police in this or any investigation should be called into Crime Stoppers 1-800-TIPS, 1-800-8477.