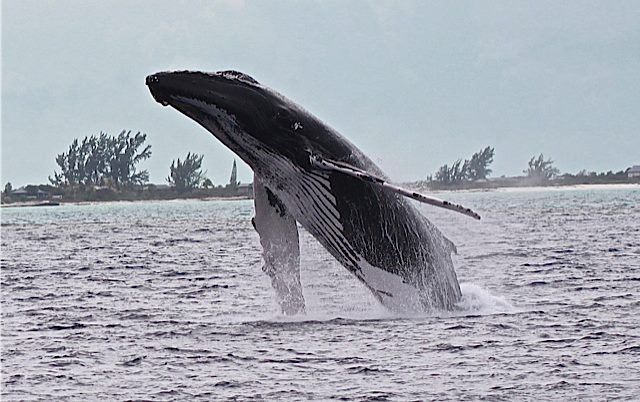 Providenciales, 12 Jan 2016 – It is one of the more beautiful sea spectacles in the world and it happens right here in the Turks and Caicos: it is whale watching.

DEMA reminds that we are in the season to see the migration of Humpback Whales and while this is a wonderful encounter it could also prove dangerous, even deadly if audiences are not careful.

A list of Do’s and Don’ts was distributed today by DEMA. Among the cautions are that all vessels should approach slowly, carefully and quietly while maintaining a distance which does not stress or threaten the whales… avoid what DEMA called fencing the whales.

It is when you block them in too close to shore or trap them between boats. You can tell that a whale is stressed when it changes its direction from 3 to 5 times and if you don’t think that is important, DEMA warns that whales can become aggressive and given their size, we are pretty much no match for the mammals.

At sea courtesy is also encouraged, DEMA said boaters should communicate to each other if they want to share the whale watching experience, first.

DEMA explained that “Humpback whales travel great distances during their seasonal migration, the farthest migration of any mammal. In winter, the whales migrate to calving grounds in subtropical or tropical waters, such as the Turks & Caicos Islands, giving us an opportunity to experience these majestic mammals first hand.”

Related Topics:cautionsdemawhale watching
Up Next