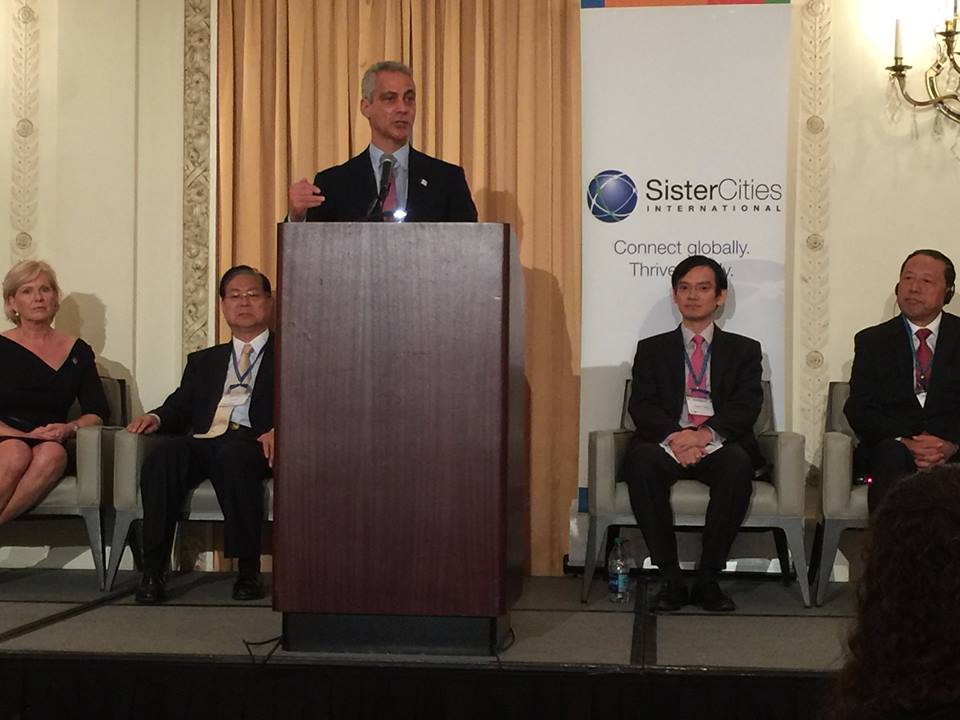 Freeport, Grand Bahama Island — During the month of October 2015, Immerse Bahamas represented The Bahamas at the 2nd Annual US-China Sister Cities Conference in Chicago, Illinois. The 2015 U.S.-China Sister Cities Conference connected business leaders, government officials, and citizen diplomats primarily from the U.S. and China. Immerse Bahamas was invited to participate as it works toward building strong sister city alliances with both the U.S. and China. The conference provided best practices and networking opportunities for continued success and growth throughout the sister city network.

With the upcoming ‘Investment & Trade Mission; Hubei China to The Bahamas’ set for Grand Bahama Island on 30th November 2015, it was an ideal opportunity to progress sister city discussions with Chinese Provinces, as well as US cities looking for business, cultural, educational, tourism, and humanitarian exchanges, throughout The Bahamas.

Chicago Mayor, Rahm Emanuel officially opened the conference by highlighting that Chicago Sister Cities International has been at the core of Chicago’s global outreach. “We understand the inherent value of Sister City relationships,” stated Mayor Emanuel. “To illustrate the growth of this relationship, in December 2013, I travelled to Beijing to sign the Gateway Cities Agreement. This agreement links Chicago with eight Chinese cities, as gateway points for investment. It expands trade and investment cooperation, strengthens communication, enhances trust, boosts economic development, and creates jobs.”

The economic impact as a result of the sister cities network was wildly touted, with many examples of major projects and business transactions that have occurred, as a result of sister cities ties. To support this, Sister Cities International (SCI) recently released Measures That Matter℠, presenting the major economic benefits of sister city relationships and their impact on the global economy from 2014. “Not only is the Sister Cities International network a leader in citizen diplomacy and peace building, but this data shows that our network is also of huge importance to the global economy as demonstrated through tourism, trade, and investment,” said Mary D. Kane, Sister Cities International President and CEO. For 60 years, SCI has formed thousands of strong, mutually beneficial sister city partnerships, with thousands of people to-people and municipal exchanges taking place each year.

The keynote speaker of the event, Jake Cefolia, Vice President, Atlantic and Pacific Sales, United Airlines, Inc., also enthusiastically shared the impact of these sister city relationships to the airline industry, and in particular, United Airlines strategic alliance and success in many of the secondary Chinese destination markets.

Immerse Bahamas, a Destination and Project Management Company, specializing in projects that benefit the entire community, was praised for its efforts to further expand and develop sister city relationships with The Bahamas throughout the world, by Chairman of Sister Cities International, Bill Boerum. With the announcement of a delegation from Hubei China set to visit The Bahamas for investment and trade opportunities, at the conference, further discussions were held on progressing sister city relationships with cities and provinces in China with Xie Yuan, Vice President, The Chinese People’s Association for Friendship with Foreign Countries.

The Delegation for the Investment and Trade Mission on Grand Bahama Island will consist of executives from various Hubei enterprises with a mission to seek potential investment opportunities in The Bahamas and to promote bilateral trade, with representation in the areas of Agriculture; Light Industry; Pharmaceutical and Chemical Industry; High-Tech Industry; Mechanical Equipment; Urban Construction; Engineering Construction and Building Materials [including Property/Real Estate Development and Tourism]; Mineral Resources Exploration; and Automobile Industry. Interested parties may register at the Grand Bahama Chamber of Commerce.

Two systems under watch in Tropics