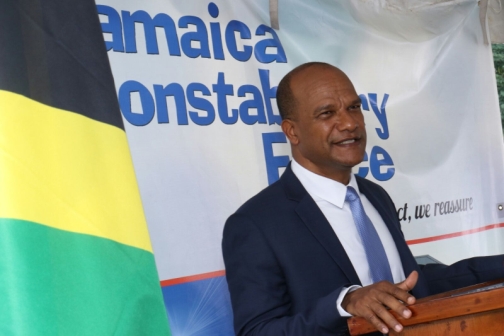 KINGSTON, Nov. 9 (JIS): The Ministry of National Security today (November 9) launched an anti-lottery scamming media campaign dubbed “Do di Math” aimed at stemming the crime in the western end of the island.
Portfolio Minister, Hon. Peter Bunting, who made the announcement during a vehicle handover ceremony at the Office of the Commissioner in Kingston, said the campaign is designed to “connect the dots, to show the corrosive impact that scamming has on Jamaicans and Jamaica.”

“Our aim is to create a social environment that rejects any assertion that scamming is a victimless crime and that it is a sophisticated ‘Robin Hood’ enterprise. We will instead show the results it has had – the murders, the robberies and certainly the forfeiture of assets and imprisonment,” he said.

He noted that the message of #LotteryScammingKills will be disseminated through radio and television advertisements, billboards, school interventions, posters and community talks.

Minister Bunting said this intervention is in response to the movement of criminal activities such as murders and violent crimes into the rural areas, due to the lottery scam.

“Because of how lottery scamming has evolved into a crime that has extremely wide participation, amongst youth, amongst people who are doing other jobs – part-time scamming, etcetera, it has changed the nature of how that crime is manifesting itself and therefore how we have to respond, and how the police have to redeploy their resources to (deal with the issue),” he said.

During the ceremony, the Minister handed over 64 new vehicles to the Jamaica Constabulary Force (JCF).