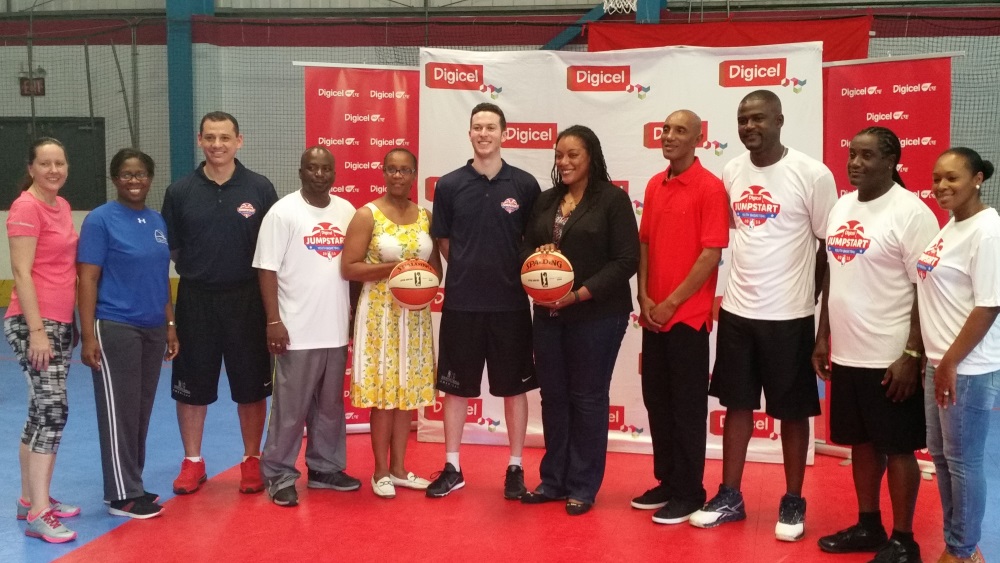 Providenciales, 17 Sept 2015 – Thursday, September 17th, 2015 – Providenciales – The Digicel NBA Youth Jumpstart Basketball Clinic, held at the Graceway Sports Centre in Providenciales, was a wonderfully huge success. The endeavor launched by Digicel and the National Basketball Association (NBA), the first of its kind in the Turks & Caicos, saw some fifty (50) young aspiring basketball players from across Providenciales participate in three days of grueling drills and practice games.

The camp, which concluded on Tuesday, Sept. 15th, was designed to pass on NBA knowledge and techniques to local players and coaches; it saw five young players rise to the occasion to be selected as the five best: Wilkins Sylvain, Shadarno Clarke, Karl Shand Jr., Brendan Handfield and Willcan Seymour. These five young men will be heading off on Sept. 24th to attend an Elite Camp in Trinidad & Tobago, where they will represent the TCI.

Digicel Head of Marketing, Trina Adams, said: “This basketball clinic was an amazing experience and a wonderful opportunity, not just for the players and local coaches but for us at Digicel as well. Our partnership with the NBA has created something special for our youth.” Adams went on to say: “All fifty (50) players worked extremely hard and we wish we could send all but we had to select only the five best in the end. We know the guys will do well in Trinidad, and possibly move on to the final NBA camp in the US. Hopefully this inspires other youth to train and prepare for the possibility of next year.”

Christopher Ebersole and Adrian Alveraz, Senior Coordinators and Coaches with the NBA’s International Basketball Operations, hosted the three-day clinic and remarked that it was an awesome experience being in the TCI for the first time and conducting the first camp of its kind. Both coaches said that they definitely want the Digicel NBA partnership to continue for next year and beyond.

According to local coaches from the Provo Amateur Basketball Association and the Rising Stars Basketball Club, who volunteered for coaching training and to assist with the camp, “it was a tough few days but a great experience”. At the end of the camp Digicel donated all of the NBA certified equipment, including balls and other items, to both basketball organizations. This will ensure that local players continue to have access to the best equipment beyond the camp.

The Turks & Caicos Islands are one of six countries that were selected to host a clinic. The top eight players from the Elite Camp in Trinidad, as determined by NBA Coaches and an NBA legend, will have the opportunity to attend an NBA game in the U.S, tour an NBA arena and be put through their paces at an NBA facility.

The Elite Camp and camper trip to the U.S. to attend an NBA game will be shared with Digicel customers online, digitally and through mobile and will be broadcast on Digicel Sportsmax, which brings NBA fans closer to their favourite teams through its live coverage of the NBA season, which tips off Oct. 27.