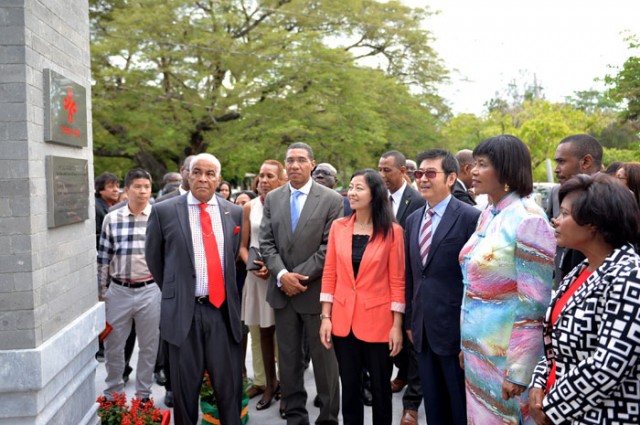 KINGSTON, Aug. 20 (JIS): Prime Minister, the Most Hon. Portia Simpson Miller, has expressed gratitude to the People’s Republic of China for their kindness in handing over a Chinese garden to the Jamaican people.

Formal documents were signed by the Government of Jamaica to accept the garden as a gift in February 2010.

Speaking at the official handing over ceremony for the Chinese Enjoyment Gardens, at the Royal Botanical Gardens at Hope, in St. Andrew, on August 19, the Prime Minister praised the relationship forged between the two nations and thanked the Chinese for the “love and affinity” that was offered to Jamaicans while working on the construction project.

On the site, Jamaicans were employed in a number of tasks, such as landscaping and construction, among other activities.

Covering approximately 600,000 square feet, the garden is to be managed by the Nature Preservation Foundation.
A landscape garden in style, it depicts the vast gardens of the Chinese emperors and members of the imperial family. It was constructed at a cost of more than J$200 million.

“This garden is set on an axis. It is defined by north, south, east and west ceremonial gates, prominent or discreet images, ornaments and architectural features, depicting aspects of oriental philosophy, mythology and the doctrine of feng shui,” said Chairman of the Nature Preservation Foundation, Leslie Chung.