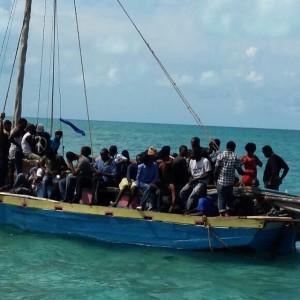 Providenciales, 13 Jul 2015 – Ninety nine Haitians tried to make it into Providenciales on the weekend, but the 27 foot wood sloop was detected; not by the coastal radar, instead it was spotted by what the police report called, and “unknown caller.”

The Marine Branch led the interception on Saturday morning around 11:30am and found the 80 males and 19 females near the Bluff, off Provo. The boat was reportedly searched and nothing illegal was found.

Border Control officers, Red Cross and Ministry of Health assisted in the processing of the 99 illegal migrants who are being held at the Detention Center off South Dock Road.

It is unclear when the migrants will be repatriated. It is also unclear why the coastal radar missed the boat.