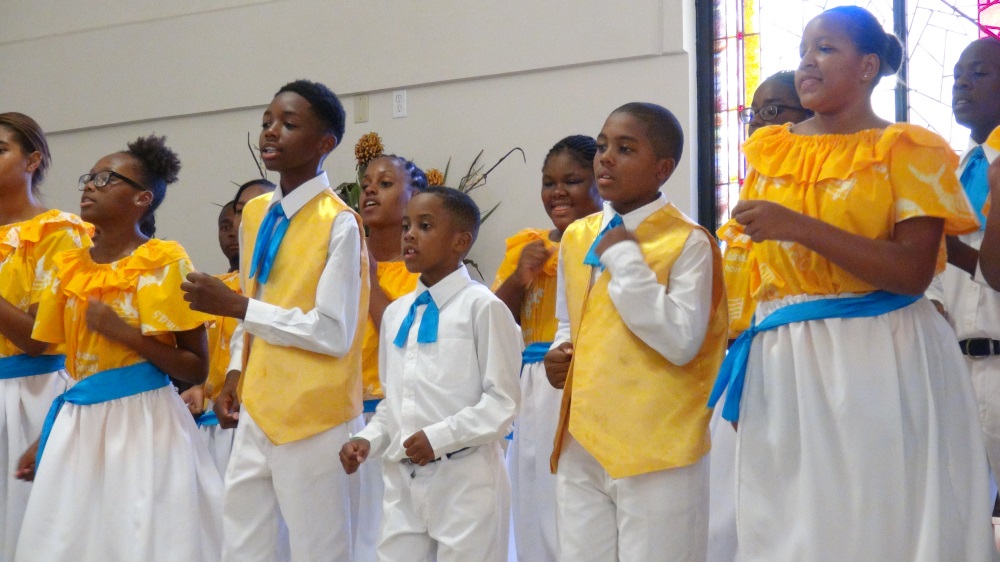 Providenciales, 15 Jul 2015 – A great culture exchange when the Bahamas National Children’s Choir which this year celebrates 25 years of existence, put on a show in two locations in the capital yesterday. In Grand Turk the small group performed at the Cruise Center after arriving early yesterday morning on the Carnival Conquest.

“This year, we are celebrating 25 years as a choir and so this is a part of the celebration, the trip and then we go to Florida later on this month and we do some more celebrations. We culminate at the end of the Year with the Adesa Weekend; it’s a weekend event where they do some community service, they have a grand ball, a children’s ball and then we have a ‘Chivival’ or a children’s revival service and that will end in November.”

Led by Patricia Bazard, the group and chaperones next stops in the Dominican Republic… from there it’s Aruba and Curacao; Bazard believes it is important for the award winning group to see the islands of the region. The Bahamas National Children’s Choir was welcomed and hosted by the TCI Tourist Board and the Grand Turk Cruise Center; we spoke to Blythe Clare who gave the welcome and send off gifts to the delegation of 33 from nearby Bahamas, Who also put on a show at the Salem Baptist Church in Cockburn Town, GT.

“When I saw them perform at the Cruise Center, with their beautifully adorned headpieces which reflects Bahamian Junkanoo, Bahamian culture and it brought joy to my heart not only because I was familiar with the songs that they sang and as I said, ‘All a We is one.’ The same folk songs they use in The Bahamas, we use it here, I felt so proud and then to see so many young people here this morning and knowing that the Bahamas just celebrated their 42nd independence under the theme, ‘Our Children, Our Future’ and our children are indeed our future because we are not going to be here forever.”

Clare said not only is this a great idea for the Children’s Choir in Provo but just as the Bahamas’ children showed off their national flag colors and culture, the TCI could do the same.

“I know if Provo they have a Children’s’ Choir and I know they have vibrant dance groups and I think what we can do is liaise with the schools, get together and for cruises you have to pay well in advance; but whether it’s a cruise or go to the Bahamas and perform on Bay Street, it can happen.”