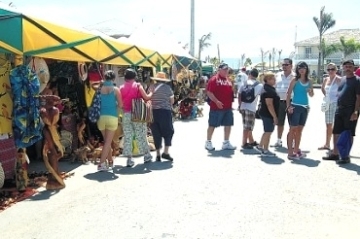 KINGSTON, April 14 (JIS): Jamaica continues to record increased stopover and cruise ship visitor arrivals, a trend which has carried over from 2014.

This, he notes, equates to an additional 35,000 visitors for the period which, along with December 2014, constitutes the 2014/15 Winter Tourist Season.

The Minister was making his presentation in the Sectoral Debate in the House of Representatives, today (April 14), under the theme: ‘Tourism Working for Jamaica’.

As it relates to cruise ship visitor arrivals, Dr. McNeill said that already for 2015, “we are up 8.5 per cent” over the corresponding period last year. Additionally, he said Jamaica has recorded increases at “all three main ports,” – Montego Bay, Falmouth and Ocho Rios.

He said the USA market’s outturn largely results from that economy “doing well,” while experiencing decline in unemployment.

Regarding Jamaica’s other markets, Dr. McNeill noted that challenges are being experienced with Canada, “as their economy has slowed down.”

He pointed out that while Jamaica has enjoyed “phenomenal” growth in arrivals out of that market, “we must realise that some tapering off was expected.”

The Minister noted that the Latin American market also tapered off, particularly over the summer months, “predictably” declining during the course of the FIFA Football World Cup, in Brazil.

“However, we continue to diversify our source markets. Of note, the Scandinavian market is performing spectacularly well. In just two months, January and February of this year, we had over 6,000 arrivals…which is more than we got out of the Russian market at the height of their growth,” he added.

Jamaica welcomed some 3.5 million visitors during the 2014 calendar year, representing a seven per cent increase over the previous year. Of this number, 2.08 million were stopover arrivals, while 1.42 million were cruise arrivals.

“Importantly, for stopover arrivals, our three main source markets – the United States, Canada, and United Kingdom – all saw increases,” Dr. McNeill pointed out, while adding that “we are expecting to finish the 2014/15 Winter (season) with strong growth, overall.”

Dr. McNeill said going forward, despite the fact that a number of the larger properties will be temporarily closed to do major refurbishing, including increasing the room complement, “we anticipate a strong summer.”