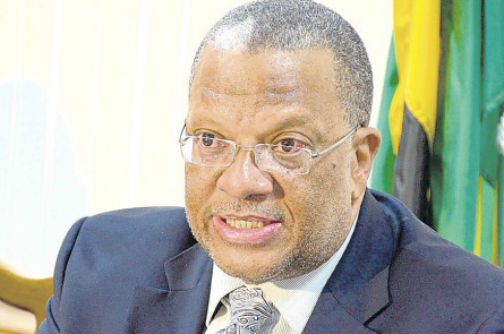 WASHINGTON DC, April 14 (JIS): Minister of Finance and Planning, Dr. the Hon. Peter Phillips, has welcomed the opportunity for the Caribbean to engage with the powerful G20 to highlight and address some of the peculiar challenges that are impeding the progress of countries in the region.

He was addressing the first Caribbean Regional Dialogue with members of the G20 Development Working Group on Monday (April 13), as part of the World Bank and International Monetary Fund (IMF) Spring Meetings now underway in Washington DC.

Jamaica was asked to co-chair discussions on the challenges confronting Caribbean countries at the meeting with the G20 Development Working Group.

Dr. Phillips, in his remarks at the start of the meeting, said the session will be of great value to the Caribbean, because it is the first time there has been engagement between the Caribbean and the G20 in an organised fashion.

Dialogue of this nature, he contended, allows for the opportunity to bring to the attention of the G20 countries and the Development Working Group, the specific conditions of the Caribbean region, which he identified as low growth and high debt.

He noted that the Caribbean is still suffering the effects of the crisis of 2008-09, pointing out that the consequences of that crisis are impeding the region’s capacity to grow, particularly because of the high debt.
“This first contact, I think, is important and it will be the first of a number of contacts. We are grateful to the Turkish authorities, who are President of the G20 this year and the Chinese, who will preside next year. During these engagements, we’ll have to collaborate with the G20 to examine some practical solutions to the issues facing the Caribbean,” he said.

“We should also be grateful to the Trinidadian authorities, who took an active part on behalf of the Caribbean in this regard. This dialogue will continue and there are specific areas in which practical solutions can be brought to the table to benefit the Caribbean,” he added.

Last October, Dr. Phillips urged the G20 to make good on its promise to assist the Caribbean region to mitigate the effects of the recession of 2008. Speaking during a Caribbean breakfast and caucus meeting in Washington DC, Minister Phillips expressed concern that the group of major economies has not kept its promise to provide financial support to assist the region.

“We continue to suffer because the expectations that were generated in 2008, coming out of the first meeting of the G20 nations, for resources to alleviate the plight of the region that was hardest hit by the crisis, have been unfulfilled,” he stated.

Dr. Phillips said there is urgent need for the G20 to fulfil its promise, citing the region’s high debt burden, climatic vulnerabilities, along with energy insecurities.

Dr. Phillips is leading Jamaica’s delegation at the IMF and World Bank Spring Meetings, which provide a forum for discussion among governors of central banks, high-level authorities of member countries, representatives of multilateral financial institutions and development agencies.

The Jamaican delegation also includes Financial Secretary, Devon Rowe; Governor of the Bank of Jamaica (BoJ), Brian Wynter; Wayne Robinson also of the BoJ; Director General of the Planning Institute of Jamaica (PIOJ), Colin Bullock; and head of the IMF Coordination Implementation Unit in the Ministry, Judith Reid.
The summit will end on Sunday, April 19, 2015. While in Washington,

Dr. Phillips will meet with representatives of the IMF, World Bank, and the US Treasury.

Related Topics:g20jamaicapeter phillips
Up Next

US Department of Justice not investigating Walter Stipa of Desarrollos