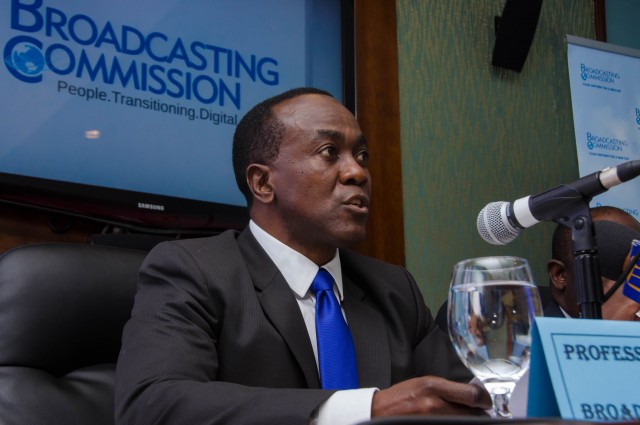 KINGSTON, April 24 (JIS): Subscriber television (cable) operators are to cease transmission of 19 unlicensed channels in their packages by May 31 this year, or face sanctions.

The directive was issued by the Broadcasting Commission of Jamaica (BCJ) today (April 24), at a press conference at its headquarters in New Kingston.

It represents the first phase of enforcement measures being undertaken by the Commission in relation to copyright regulations.

The channels to be affected include nine from the Encore suite of channels, five from the Showtime group of channels, four from the Starz group, as well as the channel known as the ‘Movie Channel Extra’.
Chairman of the BCJ, Professor Hopeton Dunn, said this action had become necessary as the distribution of unlicenced channels by local cable companies “has been elevated to a contentious international trade issue.”
He noted that cable television operators in Jamaica are required to comply with local and international copyright laws and regulations, but have in fact, been operating in breach of these requirements for many years, particularly in relation to the channels and programmes they sell to subscribers.

This, he said, is in spite of many measures that have been taken by the Commission to secure compliance.
Professor Dunn pointed out that with approximately 98 unauthorised channels being transmitted, additional enforcement measures are required for the orderly, phased elimination of unlicenced cable channel operations in Jamaica.

In this initial phase of the compliance regime, the Chairman noted that cable operators have been directed to remove the 19 channels and to provide their subscribers with notice of discontinuation and an explanation of the reasons for doing so.

“Cable operators must also make whatever arrangements become necessary, based on the terms of contracts with subscribers, including refunds and channel substitution, where applicable and appropriate,” he said.
Cable operators have also been directed, with immediate effect, to cease the promotion of any unlicenced channel to members of the public, as these will constitute false advertising and a violation of the Commission’s directive.
The Commission’s decision is as a result of intensive meetings and discussions with all stakeholders over the past six months. This included local cable operators, international channel owners, the Office of the United States Trade Representative (USTR), the Ministry of Foreign Affairs and Foreign Trade, among other Government departments.
“Our focus has been on ensuring that our cable operators obtain legitimate content for distribution in Jamaica and on arriving at a strategy for the orderly and phased elimination of unlicenced cable channels operating in Jamaica,” Professor Dunn said.

The Commission Chairman, said it regrets the inconvenience that these copyright compliance actions will cause Jamaicans, and asked for understanding of “these necessary regulatory changes in order to bring Jamaica into compliance with our international commitments and in order that subscribers are being sold cable channels which are legal in Jamaica”.

“The Broadcasting Commission has, and must continue to enforce the rules governing broadcasting, and in particular, the requirements for compliance with the Copyright Act,” he said.

“The public is being assured that we will remain vigilant in relation to the fair and balanced implementation of these compliance requirements and that we will maintain the ongoing dialogue that we have been having with all the stakeholders in order to ensure that there are settled arrangements and where possible, the crafting of new approaches for a more durable arrangement in relation to the cable sector,” Professor Dunn said.
The full list of channels to be discontinued in Jamaica are: Encore Black; Encore Family; Encore Love; Encore Suspense; Encore WAM; Encore Classic; . Encore Drama; Encore Mystery; Encore Movie Plex; Showtime East; Showtime West; Showtime TOO; Showtime 2; Showtime Showcase; Starz Comedy; Starz West; Starz Kids and Family; Starz Multiplex; and The Movie Channel Xtra.

The Happiest Nation in the Caribbean