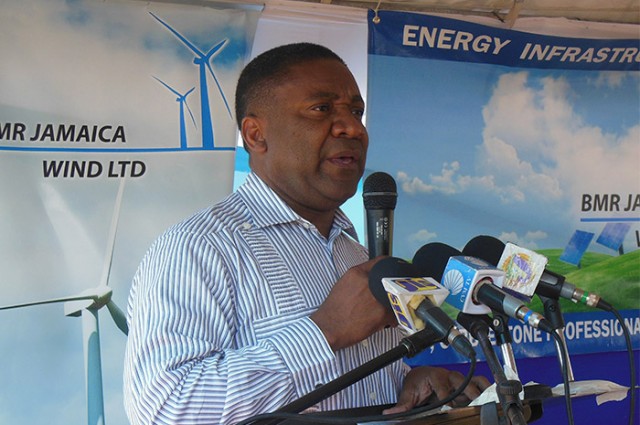 MONTEGO BAY, Feb. 26 (JIS): Ground was broken for the construction of a US$89 million 36.3-megawatt wind farm at Munro, St. Elizabeth, on February 25, by Minister of Science, Technology, Energy and Mining, Hon. Phillip Paulwell.
He was joined by representatives of BMR Jamaica Wind Limited, the United States Embassy and the Jamaica Public Service Company Limited (JPSCo).

The project will generate electricity using 11 Vesta Model V-112 wind turbines, and power will be transmitted to the national grid via a 69kV transmission line running 18 kilometres from the wind farm to the JPSCo’s 138/69kV Spur Tree substation in Manchester.

Speaking at the ground breaking ceremony, Mr. Paulwell said the project forms part of the Government’s push to lower the cost of electricity for Jamaicans.

“The price of electricity must come down. I have a view as to where it must get for Jamaica to become first world, and for us to be highly competitive. It won’t happen in three years, it probably won’t happen in five years, but my view is that we have to have a minimum of about US18 cents per kilowatt-hour for us to achieve that target,” he emphasised.

The Minister added that Jamaica’s oil import bill remains too high and investments in renewable energy are always welcome.

Highlighting the value of the BMR Wind project, Mr. Paulwell pointed out that there are several new projects on the horizon from which the country will benefit significantly.

“We have some baseload projects that are going to happen…a 190-megawatt LNG project which involves JPSCo, and I hear that the price should not exceed US12.89 cents per kilowatt-hour. I am very pleased, and as Minister, I am going to sign that licence the day it comes on my desk,” the Minister said.

Mr. Paulwell noted that the new venture at Munro and two others will bring total investments in the energy sector to more than $20 billion.

“Last week, I was nearby breaking ground for WIGTON-3 (in Manchester) and that will be an investment of $5 billion. In other couple of weeks, I go to Clarendon where another American company will be breaking ground for a 20 MW solar facility costing $7 billion. Today’s investment by BMR tops them all, totalling just over $10 billion. So, over the next couple of months, we will be investing over $20 billion in energy projects,” the Minister said.
“This will record growth in our economy and very importantly for us, the creation of just under 200 jobs,” Mr. Paulwell added.

Praising BMR for its decision to invest in Jamaica, Mr. Paulwell said it represents a display of tremendous partnership, especially in the present economic climate.
BMR has also signed a 20-year agreement to sell power generated at the
St. Elizabeth wind farm to the JPSCo.

The wind turbines are being installed on 75 acres of land which have been leased from the National Land Agency (NLA) in the communities of Hermitage, Torrington Castle and Chelsea.

Tourism Gets Millions more in Spending