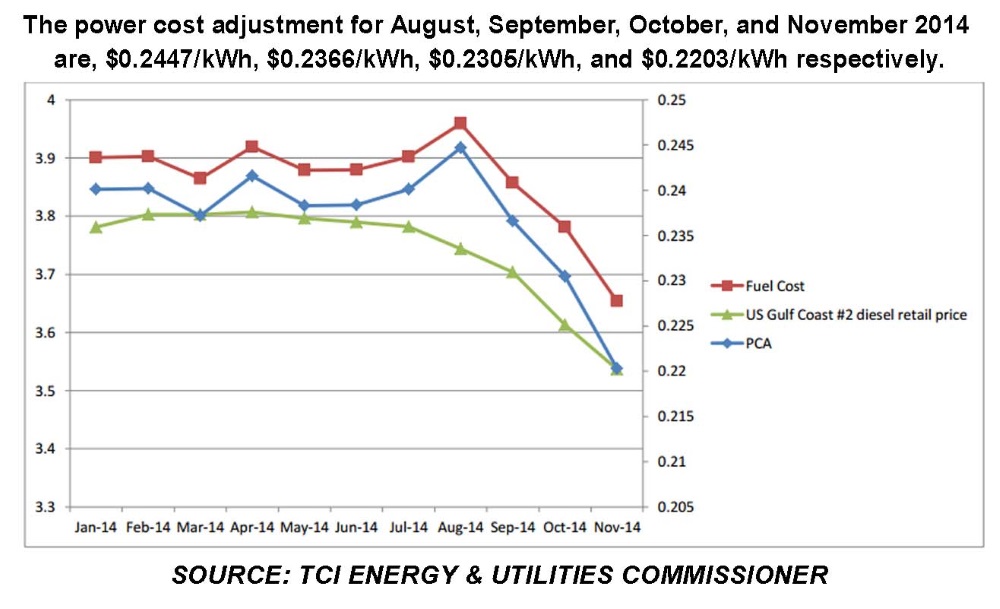 Providenciales, 08 Jan 2014 – Strong comments still coming in as residents express themselves on the cost of fuel and cost of electricity as the world continues to watch oil prices plummet to 2009 lows. One resident is calling for a consumer protection agency to be established, saying they believe the decreases on the power bills are not sufficient enough. Malike Cummings, the country’s Energy Commissioner disagrees pointing out that the fuel factor rate has steadily decreased month on month; he sent us a report where he demonstrates his tracking of the power company’s trends up to November 2014. There have been four consecutive months of decreases from August.

Nonetheless, in a letter to Magnetic Media, the business owner charges that we have only seen one penny difference in electricity bill. Fortis TCI in response to our query on the matter says, that’s not accurate… “The Fuel Factor across FortisTCI service territory has fallen by an average of 14% since August 2014 … the Company’s Fuel Factor calculations are also checked and confirmed monthly by the Energy and Utilities Commissioner.” The Energy Commissioner told Magnetic Media that the fuel factor rate discounts show the per gallon decreases; and that there are 45 gallons per barrel. Well, Magnetic Media did the math and found that the difference is just slightly above one penny.