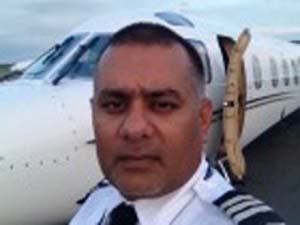 Guyana Aviation Press Release, 27 Nov 2014 – A Guyanese pilot/businessman is currently being held in a Puerto Rican jail after he failed to disclose a large sum of cash which was hidden in several parts of the private jet he was onboard.

Khamraj Lall was the co-pilot onboard the jetliner bearing tail number N822QL when it stopped in the American annex of Puerto Rico to refuel.

United States Customs and Border Protection agents were conducting routine checks onboard the aircraft when they discovered large sums of the US currency totaling over $600,000. The airport agents had asked Lall and two other occupants to declare the money they were carrying. Lall was at the time traveling with his father and the pilot of the craft.

The pilot declared US$60 while together, the co-pilot and his father produced US$12,000. The hidden cash was found under a row of seats near to the plane’s exit and a suitcase with garbage bags of money was also found near the engine.

After the first sum of money was found under the seats, he told the authorities that it was proceeds from his business and he had forgotten that he had it there.

The authorities nonetheless continued their search, and found the remainder of cash near the engine. The pilot was then reported as taking full responsibility for the cash. He stated that his father and the pilot had nothing to do with the hidden money. The flight was said to be heading for Georgetown, Guyana.

Chief Executive Officer (CEO) Ramesh Ghir told Guyana Aviation that the local aviation authorities are “shocked” by the recent developments. Ghir confirmed that Lall is a Guyanese businessman who has a private hangar at the Cheddi Jagan International Airport (CJIA).

He said the pilot was given permission some time back to construct the hangar where he is to conduct medical evacuations and other private flights out of Guyana. Lall is said to own two private jets.
However, after news of Lall’s detention surfaced, more information surfaced that the pilot was given special privileges at CJIA where he was allowed to forgo necessary customs and immigration among other security checks. Ghir and Minister of Transport, Robeson Benn both dismissed the claims declaring that all persons using the airport facilities have to go through the mandatory security procedures.

The facility is however located some distance away from CJIA’s arrival and departure building. The private hangar is very secluded. One has to turn right off the main road, to the southern end on the CJIA tarmac onto ‘Khali Road.’ This then takes you to the only building in that location of the airport.

There is a private security hut ahead of the hangar’s main building. No airport security is visible in this location.

Airport staffers told Guyana Aviation that because of the location, one can access the facility without authorities or anyone else ever knowing. This they say can be dangerous in terms of security, “while you may never know what kind of business is going on at the back there.”

It was stated also that Head of State Donald Ramotar would have traveled a few times on state business with the private jet. The bigger question asked was whether the flight was paid for with state funds or not. Benn opined that the flights could not have been free.

When asked, Ghir hinted to Guyana Aviation that it would not have been possible for the jet to smuggle money into or out of the country since it would have gone through the relevant security checks. The hangar is expected however to provide arrival and departure areas, executive lounges and spaces for customs and immigration agents among other facilities. The high-end clients will not have to go through the airport’s main arrival and departure facilities.
Currently, the private hangar is incomplete, Benn said. Much of the furnishings and internal work is to be concluded.

Lall who is said to have several other business ventures in Guyana, is expected to attend a bail hearing in Puerto Rico next week.