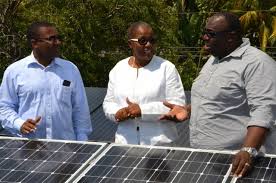 KINGSTON, Oct. 3 (Jamaica Information Service): A New Kingston business owner is reaping the benefits of reduced energy costs, following the installation of a US$30,000 photovoltaic solar system at her premises.

Operator of the Oasis on the Oxford, Lorraine Clunie, is encouraging other small business owners to take the step towards renewable energy, following a dramatic reduction in her electricity bills after just three months.
“My light bill was coming to about $150,000 per month, sometimes even as high as $210,000. I installed the 15-kilowatt system in June and the following month I received a bill for $40,000 and after that my light bill went down even further to $20,000,” she said.

Mrs. Clunie, who was speaking to JIS News at her company on Oxford Road, following a tour of the premises by Energy Minister, Hon. Phillip Paulwell, on October 3, said there were times when she considered closing her business, as the energy cost had become quite unbearable.

“There were times when just to pay the light bill, I was not able to pay my staff or to pay my lease,” she noted.
“I got to a point where I didn’t know what to do and then I heard a statement from the Minister encouraging persons to go solar and so I became aware of the possibilities and the benefits that could be derived,” she added.
Mrs. Clunie said after doing some research on solar energy, she decided to acquire the system using her credit card, importing a part at a time.

“I didn’t have all the money at once, so I decided to buy it piece by piece. It took me nine to ten months to acquire the entire system and to get everything here. And the major thing was that I didn’t have to pay any duty on the system, because of the Government’s duty free policy on renewable energy systems,” she told JIS News.

She informed that her system, which includes 81 solar panels, now provides all the energy she needs to run her New Kingston business complex, which houses the Red Snapper Restaurant, the Thirsty Man pub, and Elegant Weddings.
Mrs. Clunie is now in the process of applying for a licence from the Office of the Utilities Regulation (OUR) for Net Billing to sell excess energy to the Jamaica Public Service (JPS).

“I would encourage small business owners to just get with the programme. The fact is I am now much better off and this system will pay for itself in about 18 to 20 months,” she says.

In the meantime, Minister Paulwell told JIS News that the installation of the system demonstrates the importance of using those incentives that the government has provided to small businesses to lower their cost of electricity.

“This is a good model for small businesses and it has slashed their electricity usage and costs significantly, making the business so much more viable and productive,” he noted.

“So, when we say that each person has a responsibility to reduce the cost of electricity, this is one of the models that we want to promote,” the Minister said.

He pointed out that once the system is installed, it is maintenance free for almost 20 years. “You make back your money in four years and you’re able to generate a significant profit from it, so it is definitely a win, win,” the Minister said.