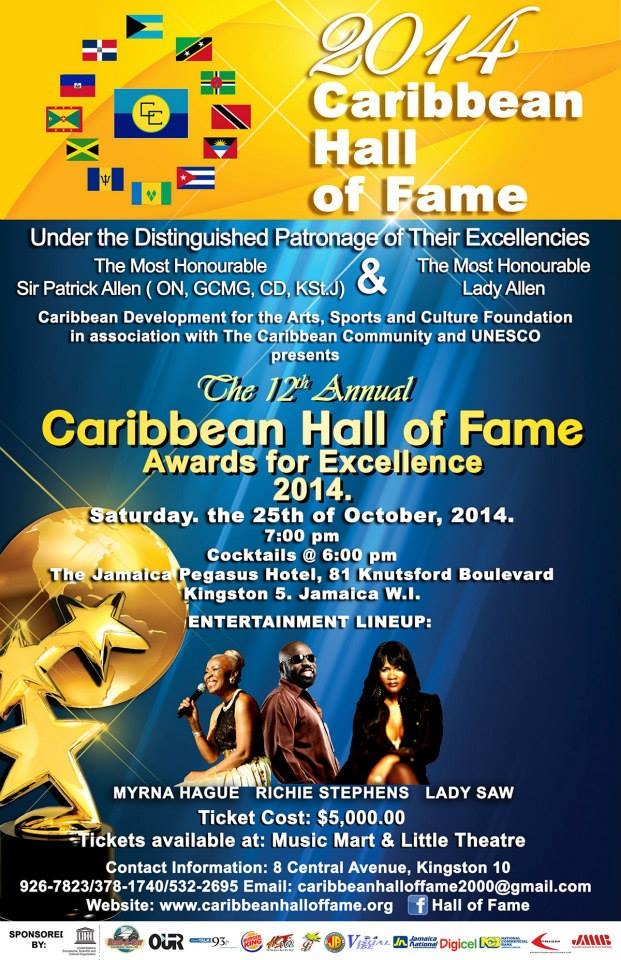 The Executive Director of the Caribbean Development for the Arts, Sports and Culture Foundation Mr. Garnett Reid, J.P says that the Foundation’s Program is geared towards, strengthening and preserving Jamaica and the rest of the Caribbean’s Cultural Heritage. He noted that the main aims of the foundation are:

1. To supervise and aid in the development of the creative ability of Caribbean people through creative planning.
2. To encourage the natural geniuses of our people to reach the highest point.

The Caribbean Development for the Arts, Sports and Culture Foundation in association with the United Nations Educational, Scientific and Cultural Organization (UNESCO) will be staging its 12 Annual Caribbean Hall of Fame Awards for Excellence after a 2 years break. This year the Foundation will be hosting the event in association with United Nations Educational, Scientific and Cultural Organization (UNESCO) which will be sponsoring the citations and trophies. In the past we have partnered with United Nations World Decade for Cultural Development (UNDP). We are happy to have UNESCO partnering with us for the 2014 Caribbean Hall of Fame Awards for Excellence 2014. In 2004 the foundation was honored by the United Nations (UN) as one of the best organizations geared within the western hemisphere. We have received hundreds of nominees from across the Caribbean and the selection committee headed by Dr. Jean Small – Chairman of the Selection Committee, is in the process of short listing the nominees received.

The award shall be made to a person:
a. Who has achieved eminence for work in their field of endeavour.
b. Whose achievement is one of the highest recognition.
c. Who has exhibited unswerving commitment to and has the capacity for the continued growth and development in the particular field.

According to the Executive Director- Mr. Garnett Reid, this organization is the only one of its kind within the Caribbean to stage such an event. We are calling on other Caribbean Nations to support this regional Red Carpet Affair.

The Function starts at 7:00pm and cocktail will be served at 6:00pm. Entertainment will be provided by the Caribbean First Lady of Jazz Ms. Myrna Hague, Ms. Marion Hall (Lady Saw) and Mr. Richie Stephens. Master of Ceremony will be Ms. Dahlia Harris and Mr. Horace Phillips.

The Caribbean Development for the Arts, Sports and Culture Foundation is a non-profit, non-governmental organization, established to foster excellence, growth, development and achievement in Arts, Sports, Music and Culture.

Criterion:
This Prestigious Award is made by the Foundation in recognition of outstanding contribution to those who have achieved excellence in Arts, Sports, Music and Culture.
1. The Award shall be made to a person:
a. who has achieved eminence for work in their field of endeavor
b. whose achievement is of highest recognition
c. who has exhibited an unswerving commitment to, and capacity for continued growth and development in the particular field.
2. The recipient of “Hall of Fame” Award shall:
a. be of Caribbean Nationality
b. be a person whose performance has been recognized by the public at the highest level.
c. the award recipient should be alive, currently active or a retiree.
d. The selection shall not be influenced or determined by factors of race, color, religion, sex or political affiliation