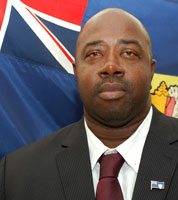 Turks & Caicos, 23 Sept 2014 – Government Support Services Minister, Hon George Lightbourne is alleging victimization for being so outspoken. The Minister during his statement in the early part of House of Assembly debate yesterday says because he is so vocal, he gets no support to do his work, even charging that during budget debate, there was misinformation about a salary and position he and other Members believed should have been eliminated.

Minister Lightbourne was once again going to bat for islanders in government employ, this time his Permanent Secretary or acting PS, Ian Astwood. An update coming too on the Salt Cay Reverse Osmosis Plant; that it will be ready for operation by November and that Grand Turk will continue to ship water to the tiny island, home to about 80 people until the RO plant is done. The Official Opposition PDM announcing that they too recently took a tour, and found the waste disposal situation a mess and are informed that the RO plant will not be done until December.

Minister Lightbourne defended his ‘intel’ on the completion as good and that if there is any change, the House of Assembly would be immediately informed.