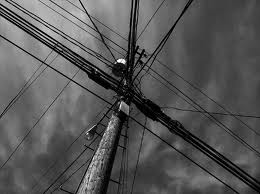 As many as 2,200 affected for as long as 12 and a half hours due to the loss of 26 megawatts of power and two engines over the past five days as the entire country has been rocked by a freakish thunder and lightning storm.

Fortis TCI admitting the phenomenon caused a series of catastrophes which forced the company to have workmen out around the clock to conduct repairs, and get customers back on.

Eddinton Powell, the CEO of Fortis was flanked by executives as he responded to media questions in a late day press conference called by the company yesterday. It was revealed that Provo was the affected island, that larger commercial customers were asked to use their back up power until there was full restoration to city power and that this situation was quite unexpected and presented issues, worse than a hurricane according to Powell.

QUOTE. Business was crippled Tuesday, including the customs department at the south dock where operations were halted … Powell promised that his team was focused on getting power back and did so in some pretty dangerous circumstances. As for what this will cost Fortis, no calculations have been made yet… and as a safety precaution, residents with severe flooding which may have impacted your homes’ electrical should contact Fortis immediately.