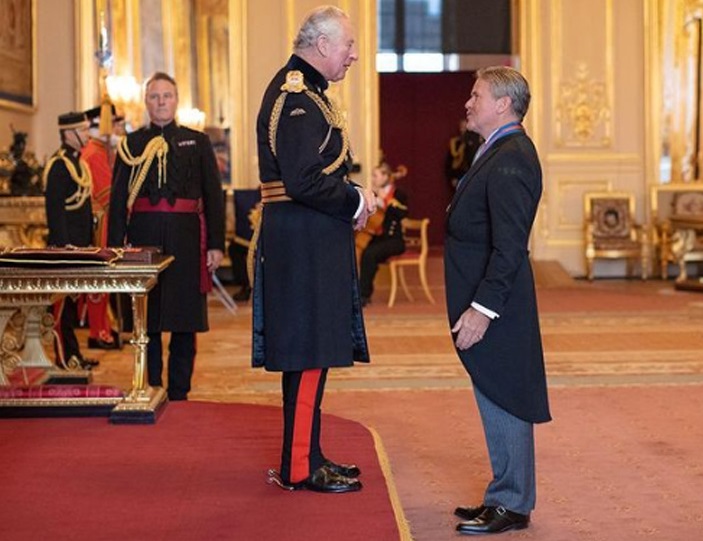 #TurksandCaicos, April 15, 2022 – The Governor of the TCI is now officially a Champion of Saint Michael and Saint George.

civil servant prior to his duties in the TCI. That work spans stints in Washington, Afghanistan, Pakistan, India, Nigeria, Germany and Northern Ireland.

The CMG order is conferred on men and women who hold high office or who render extraordinary or important non-military service in a foreign country, or for important or loyal service in relation to foreign and Commonwealth affairs.

“It was nothing short of a wonderful day. I’ve spent more than 50 per cent of my working life overseas and when I think back over a 40 year career -the award was for Service it’s a British foreign policy prior to my time in the TCI-the overwhelming thought is the power fortunate I was to be in the right place at the right people at the right time…” said Nigel Dakin, TCI Governor in an Instagram post.

The investiture was Wednesday March 30, 2022, delayed two years due to the Coronavirus Pandemic, said Governor Dakin\ and conferring the honour, was His Royal Highness Prince of Wales (Prince Charles) and The Governor described Windsor Castle as “beautiful.”

“If the CMG represents anything it represents just how lucky I’ve been and how much amazing support I received and that continues to this day in the TCI,” said Dakin.

The Governor, during this trip to Great Britain attended the passing out ceremony of TCI’s newest Sandhurst Graduates and members of the Regiment, and got into conversations about national security for the islands.

“I’ve been visiting West Midlands Police who have twinned with the RTCIPF giving us access to the experience of the UKs second largest Force and visited West Midlands Ambulance Service who are interested in a similar relationship (more on that over the next few days).

I also called on a British Home Office Minster to discuss support to our Borders work and I’ve been in Portsmouth looking at how we can draw on the UKs ability to monitor the seas around us in TCI. Technology is moving quickly and to our advantage.”