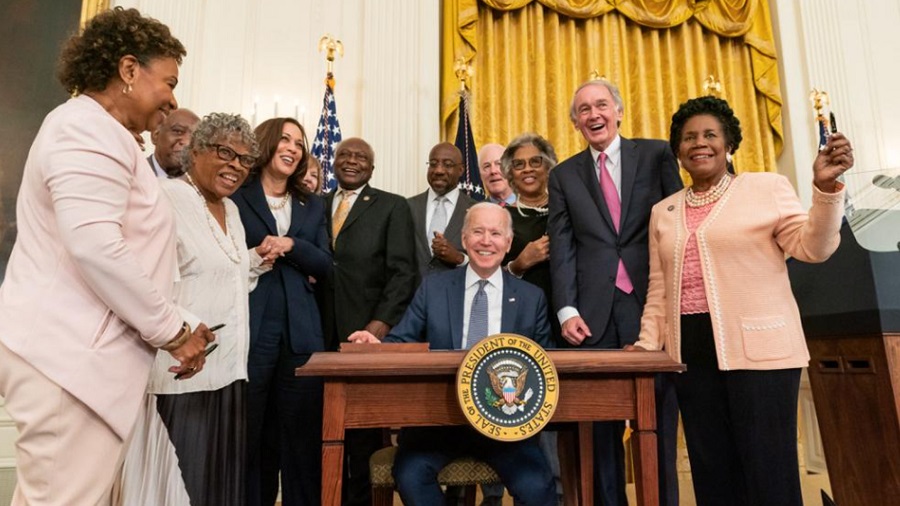 #USA, June 19, 2021 – “Juneteenth is the oldest nationally celebrated commemoration of the ending of slavery in the United States. Juneteenth commemorates African American freedom and emphasizes education and achievement. It is a day, a week, and in some areas a month marked with celebrations, guest speakers, picnics and family gatherings. It is a time for reflection and rejoicing. It is a time for assessment, self-improvement and for planning the future. Its growing popularity signifies a level of maturity and dignity in America long overdue. In cities across the country, people of all races, nationalities and religions are joining hands to truthfully acknowledge a period in our history that shaped and continues to influence our society today. Sensitized to the conditions and experiences of others, only then can we make significant and lasting improvements in our society,” says Juneteenth.com, the website dedicated to the cause, the movement and nowt the national public holiday.

The holiday was observed on Friday, with Federal workers across the US getting a half day off ahead of the June 19 commemoration; it has been 156 years since its observance. Juneteenth also represents a delay of justice and freedom to African Americans in Texas; two and a half years after freedom, the slaves were still bound because they did not know they were free.

That horrible delay is today immortalized in a celebration; Juneteenth.com says:  “The US will now officially recognize Juneteenth. President Joe Biden signed a bill passed by the Senate and House, June 15th and 16th respectively – with no opposing vote in the Senate and only minor Republican dissent in the House.”

Opal Lee has become an iconic figure linked to the commemoration.  Named “the grandmother of the movement” by President Joe Biden, Ms. Lee was there and witnessed the President on Thursday signed the bill to make it official.

Kamla Harris, the first woman and African-Asian Vice President of the United States of America, was also present at the signing, which took place at the White House.

“”The promise of equality is not gonna be fulfilled until it becomes real in our schools, on our main streets, and in our neighborhoods,” said Joe Biden, US President in remarks at the ceremony.

Media reports informed:  The Juneteenth National Independence Day Act was signed into law at the White House, June 17, 2021, in Washington.

A great and sobering triumph it must have been for the now 94-year old Opal Lee; she,five years ago, walked from her home in Galveston, Texas to Washington DC to raise awareness about the significance of Juneteenth. Lee will walk again on Saturday, June 19th, in a 2.5 mile trek in honour of the new national holiday.  The 2.5 miles is not without meaning; it remembers the two and a half years slaves in Texas were oblivious to their freedom.

Opal Lee and advocates say, Juneteeth as a national holiday now gives all of America a time to remember and to celebrate; to end of the shame of slavery and galvanize around the God-breathed ideal, that all people are created equal and are entitled to chart their own course toward a happy life, freely.