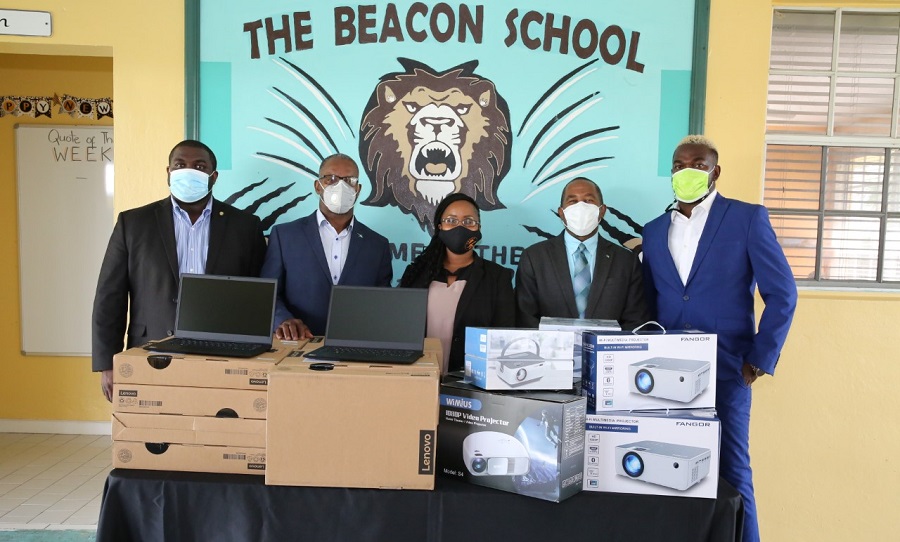 #GrandBahama, May 3, 2021 – The Beacon School received laptops for every teacher and projectors for each classroom on Monday, May 3, from a non-profit organization, Beacon for Change.

Minister of Youth, Sports and Culture, the Hon. Iram Lewis on accepting the donation described it as a “great day,” noting he was proud of Mr. Sonless Martin and Ray Ferguson of Beacon for Change.  Mr. Martin, a Bahamian who was born in The Bahamas, moved to the United States, but nevertheless continued to come back and give back said Minister Lewis.

The Beacon School had a need, and they were there to answer the call.

According to Martin, a native of Grand Bahama who now resides in Florida, it is an honour to come back every year to do something for the school. For the past 10 years, he said, he has been reaching out to the principal of the Beacon School to find out what is needed, and he and his organization would come to Grand Bahama to make the donations.

Also present was Ivan Butler, Superintendent of Education, who thanked the organization for their significant donation as it is geared towards teachers as well as students. He thanked Beacon for Change on behalf of the Ministry of Education.

Principal of the school, Titi McKenzie Moss, thanked Mr. Martin and Beacon for Change for the donation and noted that while several donations came in for the students to have tablets, the teachers were lacking devices.

“I know that in this time when technology is so important, this will go a long way in assisting our children whether they are in the classroom or doing online learning.”

DONATION FOR TEACHERS – Beacon for Change, a non-profit organization, donated laptops for teachers and projectors for classrooms to the Beacon School on Monday, May 3, 2021.   Shown from left are: Sonless Martin, Beacon for Change; Minister of Youth, Sports and Culture, the Hon. Iram Lewis; Titi McKenzie-Moss; Ivan Butler, Superintendent of Education; and Ray Ferguson, Beacon for Change.