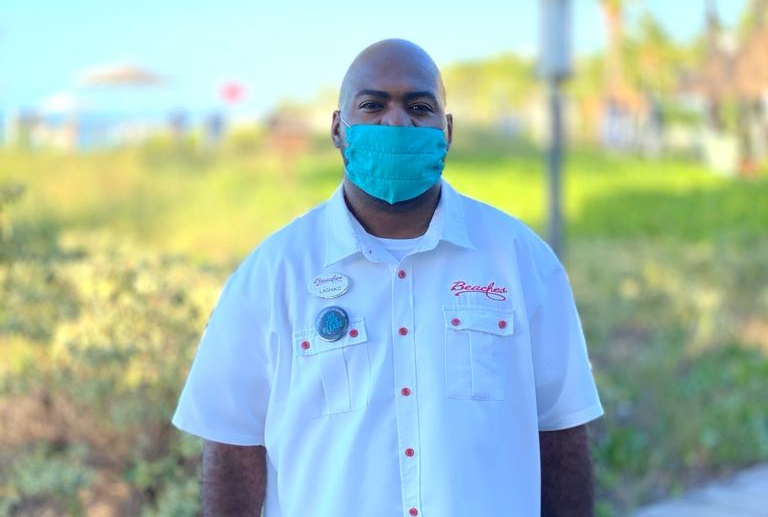 PRESS RELEASE (February 19, 2021): It is safe to say that 33-year-old Lashiko Seymour is a son of the Beaches Turks and Caicos soil. After all, he is from a long list of Seymours who have worked at the resort over the years.

But even though all his siblings have worked with Beaches and his mom is still employed to the Sandals owned company, this Seymour’s story is one of perseverance and growth.

Fresh out of Johnson and Wales University in Miami, the Turks and Caicos native applied to a number of resorts in the country but it was Beaches Turks and Caicos that opened its doors to him.

“I got accepted to work as a front desk agent. I was so happy for the opportunity,” he shared. He pointed out that long after he started working at Beaches, other resorts started calling him but he was in no way going to leave his job.

“This is a company that is well established and known worldwide. I saw that I was able to grow here and this could provide me with the stability I needed as a young man looking to better myself,” he added. And grow he did as just several months later Seymour was promoted to night auditor and no time after that he was promoted to the role of assistant night manager.

“While I was working as a night auditor, I was checking out a guest early one morning and a lengthy conversation ensued and she thought that I would make a great manager one day. She gave me some advice that I did not take lightly,” Seymour recalled.

The guest happened to be one of the directors at the company’s corporate office. According to Seymour, she told him that because he worked at nights, it may be hard for him to be seen by others so he should ensure that he allows them to know who he is and see his value.

“After that, I started talking to my bosses in the mornings. I researched more about the company and would strike up conversations with them. I wanted them to remember my name. I would train in other departments once I realized that they had a leadership role available. I remember printing copies of my resume and dropping one in every manager’s box. After a time, everyone knew my name,” said Seymour who could not help but chuckle as he shared the memory.

Seymour moved on from assistant night manager to night manager in just about six months. While he was evidently growing, he shared that he was never one to settle. He is always looking for ways to better himself. One may even call him an overachiever.

“I am satisfied professionally. I am proud of all I’ve been able to achieve and I’m pleased with my growth. Working here has made it possible for me to take good care of my family and I feel so good to talk about what I do,” he said.

He shared that one of his biggest motivations is his mother, Marsha Seymour who worked hard to put her sons through school. When asked if his mother is proud of where he is today, his response was an emphatic, “Of course!”

“One of my greatest desires has always been to make her proud and right now I know she is. She is proud of all of us,” he explained.

Seymour shared that he would encourage others to go after whatever they wish to achieve and always present themselves as professionals for one can never tell who’s watching.

“I also want to say I’m grateful to this company that has aided in the development of so many people. Through various programmes, the Sandals Corporate University and their idea of promoting from within, many have benefitted,” said Seymour.