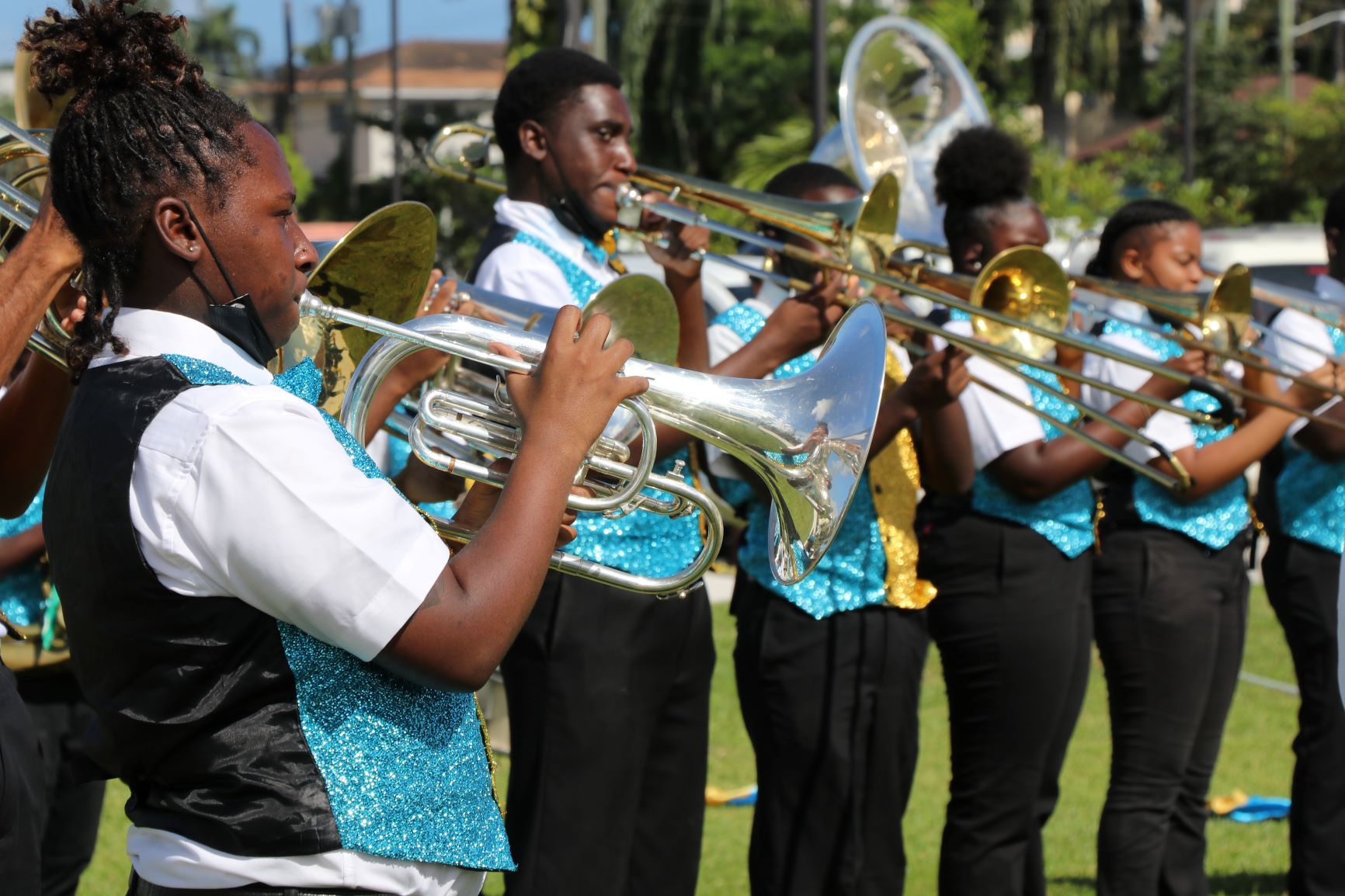 #NASSAU, The Bahamas – November 18, 2020 — Minister of National Security the Hon. Marvin Dames said, on November 16, 2020, that it was over two years ago since the National Neighborhood Watch Council programme was birthed with “community minded individuals who wanted to make a lasting difference in their respective neighborhoods.”

“Their vision was to collaborate with their neighbors to solve community safety challenges in partnership with law enforcement,” Minister Dames said, during the during the Official Launch Ceremony of the National Neighbourhood Watch Council (NNWC) / South Central “We Are One” Campaign, held at the Edmund Moxey Community Center.

“But, most importantly, they wanted to enrich, uplift and inspire a renewed sense of national pride within the hearts and minds of all Bahamians, throughout the communities in which they lived.”

Among those present were Prime Minister the Most Hon. Dr. Hubert A. Minnis; Permanent Secretary Marco Rolle; Leader of the Official Opposition representative and Member of Parliament Picewell Forbes; Deputy Commissioner of Police Ismella Davis-Delancy; President of the Bahamas Christian Council Bishop Delton Fernander; Superintendent and NNWC National Coordinator Wilton Johnson; NNWC Co-Chairs Alesha Hart and Keno Wong; Chairman of the Bahamas Public Parks and Public Beach Authority and Member of Parliament Shanendon Cartwright; Pastor Mario Moxey; President of the Ridgeland Park Community Association and Chairman of the Organizing Committee of the NNWC / South Central “We Are One” Campaign Shelly Lewis; and other Government and civil society stakeholders.

Minister Dames noted that, since that start more than two years earlier, the National Neighborhood Watch Council had morphed into one of the fastest growing and successful community programs that The Bahamas had ever seen.

“With nearly 150 neighborhood watch groups which span over New Providence, Grand Bahama, and several of our Family Islands, the NNWC has modernized the traditional style of community engagement to one of community empowerment,” he said.

Minister Dames pointed out that, under the leadership of the National Coordinator and two distinguished community leaders who both serve as co-chairs, supported by the Ministry of National Security, the NNWC continued to make a positive impact on community safety and bridge the gap between local law enforcement and members of the public. The evidence of the NNWC’s success is both quantitative and qualitative, he added.

“The quantitative evidence is compelling as, during the past two years, members have targeted various property crimes that were impacting the quality of life and safety within some communities throughout The Bahamas — including burglary, housebreaking, and stolen vehicles,” Minister Dames said.

“As a result of the strategies employed by law enforcement and partnerships with the residents through the NNWC, these offences all shown a noticeable decrease.”

“From a qualitative aspect, the NNWC has been successful in promoting a better quality of life, a greater sense of security, responsibility, and personal control, and the strengthening of community pride and unity among citizens and residents, alike,” he added.

“NNWC members are building and sustaining a nationwide culture of prevention that is focused on safety awareness, and observation which draws on the compassion of our citizens and residents, enabling them to lend a hand to their neighbors whenever and wherever the need arises.”

Minister Dames said that stakeholders were especially grateful to Prime Minister Minnis for having proclaimed November 16, 2020 through December 18, 2020: “We Are One” — Unity and Healing in the Midst of Crisis.

“Our nation is built on the strength and resilience of our citizens,” he said.

“If there is one thing that Hurricane Dorian of September 2019 and the global pandemic of 2020 declared in March 2020, has taught us, is that we all need each other to survive.

“The ‘We Are One’ National Campaign is filled with a series of exciting community-building events that are geared toward building unity, healing, lending a helping hand, and changing lives throughout our nation.”

“All Bahamians throughout the length and breath of The Bahamas are encouraged to support and participate in the activities,” Minister Dames said. He also congratulated the “hard-working” organizing team under the leadership of Ms. Shelly Lewis and Lakel Johnson for “putting together an impressive lineup of events which provides all Bahamians with an opportunity to restore hope; happiness; and togetherness as we battle some of the most challenging times that our country has ever been faced with”.