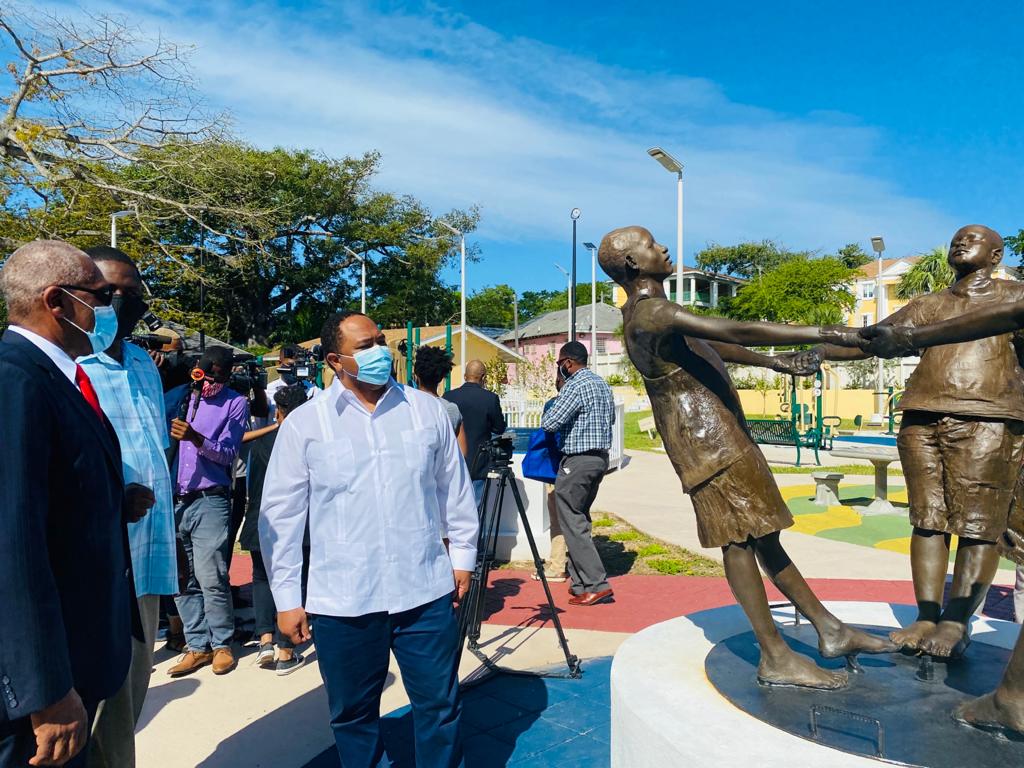 # NASSAU, The Bahamas – November 16, 2020 — Prime Minister the Most Hon. Dr. Hubert Minnis, the Hon. Travis Robinson, MP for Bain and Grants Town, alongside government executives and private partners, today (November 16) unveiled a plaque that signals the completion, dedication and reopening of Phase 1 of the Southern Recreation Grounds. A soft-re-opening ceremony for the newly refurbished park located in the Overthe-Hill community was held in compliance to COVID-19 restrictions.

Prime Minister Minnis revealed today that another re-opening ceremony will be held at a later date at which the entire community will be invited. A component of the Over-The-Hill Community Development Partnership Initiative, the refurbishment includes: an outdoor fitness centre, installation of WI-FI and CCTV cameras (24-hour security), signage, new playground equipment, a new basketball court, facilities for volleyball, and green spacing including native flora and fauna.

Prime Minister Minnis, a native of Over-The-Hill, recounted his promise to transform and rebuild the community. “I made a commitment that we must change the Inner City and give each and every individual, regardless of his financial and religious status, an opportunity to excel and succeed.

“This led to the Government’s commitment and fulfillment of free pre-school and university education for qualified students in The Bahamas. “Like the Southern Recreation Grounds they were promises made and promises kept,” he said.

Now a Tax Free Zone, the Prime Minister said it was essential that the Government make this declaration for the Over-The-Hill community.

“Our people, who have been neglected for so long, would have a head start in their redevelopment and advancement of business and housing opportunities.” In his walk down memory lane, he highlighted establishments in the surrounding area including Keith’s Chicken Shack, Paul Mayer’s Theatre, the Drum Beat and Peanuts Taylor. “Many tourists walked Over-the-Hill and came to the Drum Beat. As they visited, the whole community became a town. While they were there we sold our goods etc. That’s our dream to rebuild the inner city back to those glory days,” he said.

He announced the Government’s plans to purchase properties adjoining the Southern Recreation Grounds to build an amphi theatre and make it a tourist attraction where arts and crafts can be sold. Mr. Robinson remarked, “Today is yet another act of fulfillment on the promises made to the people of Bain and Grants Town and by extension all of our inner city communities.

The more than 40 years of neglect and broken promises have come to an end. Today, we signal the reprioritization of people and communities that need the government help the most.

This redevelopment of Southern Recreation Grounds is by far the single largest investment in our inner city community in over 40 years thanks to our Prime Minister Dr. the Most Hon. Hubert Minnis.”

A product of Bain Town, former student and head boy of C R Walker Senior High School, he said Southern Recreation Ground is rich in history, from serving as a meeting place during the Burma Road Riot and the General Strike to hosting political rallies leading to Majority Rule.

“These grounds have played a pivotal role in the fight for equality and the progression of the modern Bahamas,” he added.