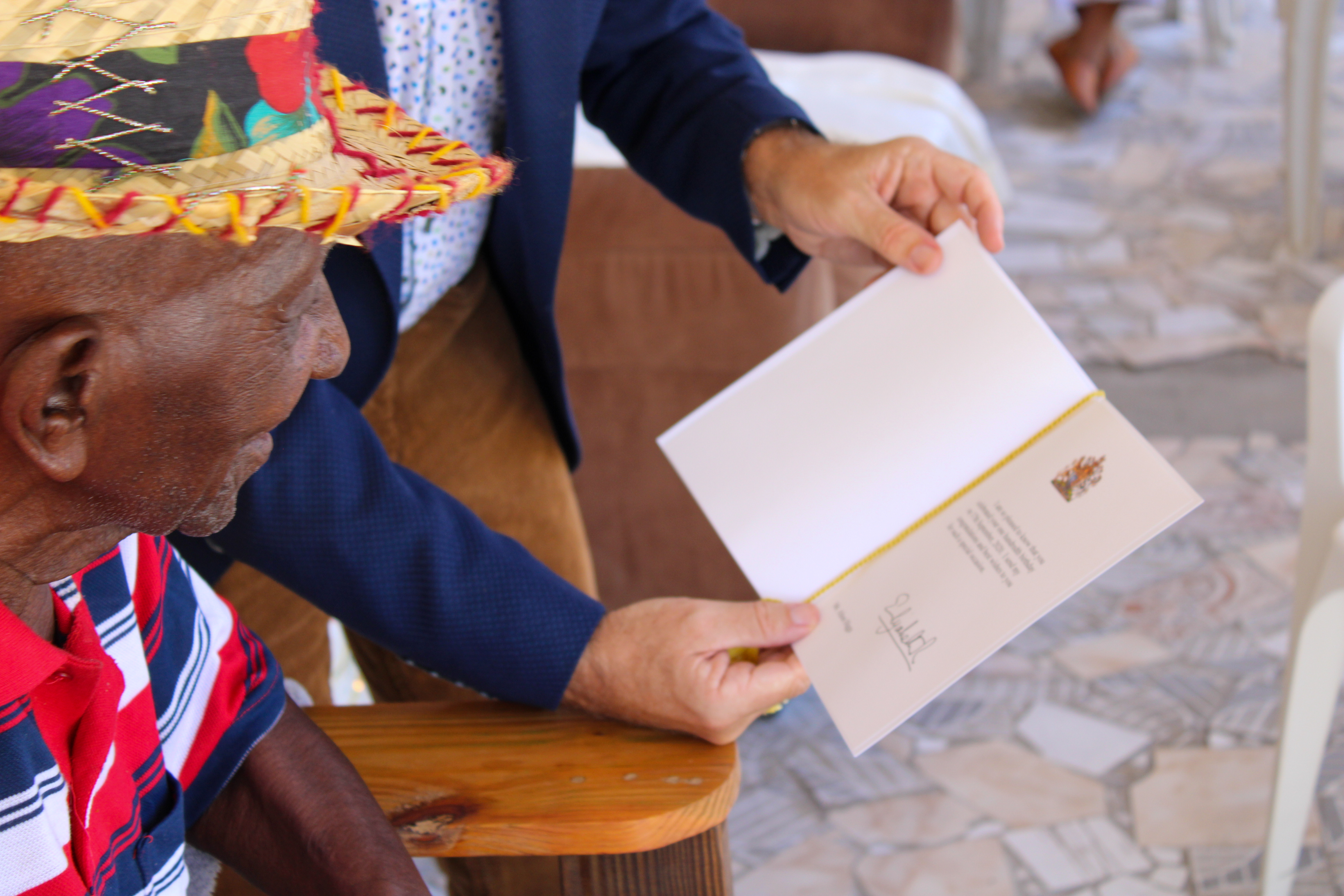 #Grand Turk, Turks and Caicos – October 6, 2020 –  Local centenarian, Mr. Alton Higgs, celebrated the achievement of a century of life on 17th September 2020. However, on Monday, 6th October his family, in collaboration with the Governor’s Office arranged for Mr. Higgs to receive a special surprise.

In honour of his amazing milestone, His Excellency the Governor, Nigel Dakin, delivered to Mr. Higgs a special birthday telegram from Her Majesty, Queen Elizabeth.

Mr. Higgs was excited by his card from Her Majesty, and was eager to share his story of meeting the Queen in South Caicos during her only visit to the Turks & Caicos Islands, which begun the tradition of the annual “Big South Regatta”.

“A Hundred Years old and looking great! I had such pleasure today to visit Mr Alton Higgs, at his home, with his family, in Grand Turk,” remarked Governor Dakin.

Governor Dakin went on to say, “It’s the first time I’ve delivered a telegram from Her Majesty the Queen to celebrate a centenary. It was made all the more special because Mr Higgs had met, and shaken her hand, when the Queen visited South Caicos (having been to Grand Turk) on the Royal Yacht Britannia on February 25th, 1966. He told me the story of the donkey race that was put on for her; subsequent research tells me that Earl Basden riding “Willie Boy” took an early lead and won.

What a life story Mr Higgs has had. From Middle Caicos he lost his father as he started Primary School at age 6 and left school at 14 to farm and to fish. Married for 50 years, once he lost his wife he turned himself to crafts; he helped organize tourist tours; he allowed himself to be interviewed by visitors to understand the Islands culture and history.

But the most interesting aspect of his long life is that he is a genuine “bush doctor”, although he much prefers the term “local herbalist”.”

Mr. Higgs explained that being born in the Caicos Islands in the 1920’s gave no access to clinics – so people worked hard to understand how the natural world could help. He devoted himself to this gift and is the star of a very beautiful book published, by two New York Doctors, capturing this knowledge and heritage called ‘The Endemic Medicine of Middle Caicos as Practiced by Alton Higgs’.

Commenting further, Governor Dakin said, “I know little if anything about “bush medicine” but it strikes me that – if you need reassurance that there’s something important to learn – then Mr Higgs is quite literally the living proof. Not only is he clearly “old” yet healthy he’s also unbelievably “young” in terms of outlook and conversation. A genuine inspiration.”