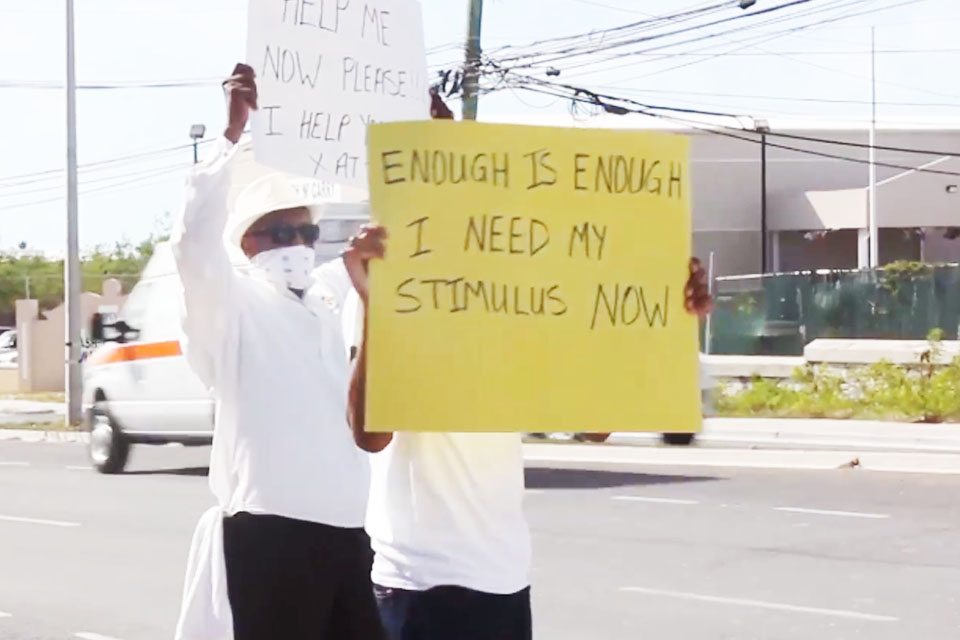 #Providenciales, Turks and Caicos Islands – September 7, 2020 — Three hundred taxi drivers are despairing over their apparent inability to benefit from a multi-million government stimulus program.  Another tranche of payments, were at the end of August, dispersed to Turks and Caicos businesses and taxi drivers were not among the recipients.

Many have now lost confidence that Sharlene Robinson, the Premier and Finance Minister will ever deliver on the much needed funds.

The Premier however, defends that significant effort was made to get money into the pockets of drivers.  In her comments regarding the ongoing saga, drivers were encouraged to review what was “clearly set out in writing” in order for them to have gained access to the financial assistance.

“We were told by NIB that they were waiting on the okay from the Premier.  The money is not coming from NIB, its coming from government and most of the drivers have given up on ever getting it,” said a taxi driver who is today at home guiding her daughter through virtual classes.

The mother says, she can no longer go out to work and the whole “thing is very frustrating.”

In the heart of tourism’s busy season, COVID-19 swarmed the Americas and the Caribbean causing governments to respond with border closures and national lockdowns.  It was a tactic which aimed to keep COVID-19 at bay, while hospital capacity was built. The fall out was a recessionary-like crash of economies.

With the airports closed, there were no tourists coming in, no guests to shuttle and income froze for the hundreds of ground transportation operators in the Turks and Caicos.  Hospitality workers were first to receive the government stimulus cheques.  Taxi Drivers were not counted in that category.

Magnetic Media has learned that one or two drivers have reported getting a stimulus payment.

“I would say around 90 percent of us are still waiting.  It may not be much money to some people, but for the taxi drivers I have spoken to, it would help with groceries, rent and paying power or internet bills.”

Another driver; told Magnetic Media said she has decided to accelerate her retirement plan.  The senior taxi driver informed that she has given up on ever getting the stimulus and thanks God for her children who are supporting her as she takes care of the grandchildren.

Premier Robinson said the Emergency Order policy could not be amended; therefore a new policy was created to graft taxi drivers into the government payout plan.

“The policy changed to allow taxi drivers who were in serious arrears with NIB to access the benefit.  They were told to apply before it closed.  They had only to go to NIB and get an assessment done and upload the assessment,” explained the Premier today.

It appears a muddy situation.  The Premier in her statement resolutely states the taxi drivers did not apply.  The taxi drivers are adamant that they did, repeatedly.

“It appears they did not apply as suggested.  The decision had then been taken to reopen with the hopes that they will apply.  This was communicated in a letter in details,” shared the Premier.

There has reportedly been no communication from the Office of the Premier since June, when a series of protests were held at the Providenciales office by disgruntled drivers.

Meanwhile taxi drivers are finding ‘jobs’ since tourism reopening on July 22 are few and far between.

“We are now waiting four to five days to get a job.  Delta brought 25 people in yesterday, their last flight until November I believe and no jobs were passed to the taxi line.  This is our reality.  While government is feeding the Sri Lankans who have claimed political asylum two meals a day, Turks and Caicos islanders are going to bed hungry.  I want to know when Government is going to look out for locals?”

It is unclear if the taxi drivers are still able to access the free cash from Government.