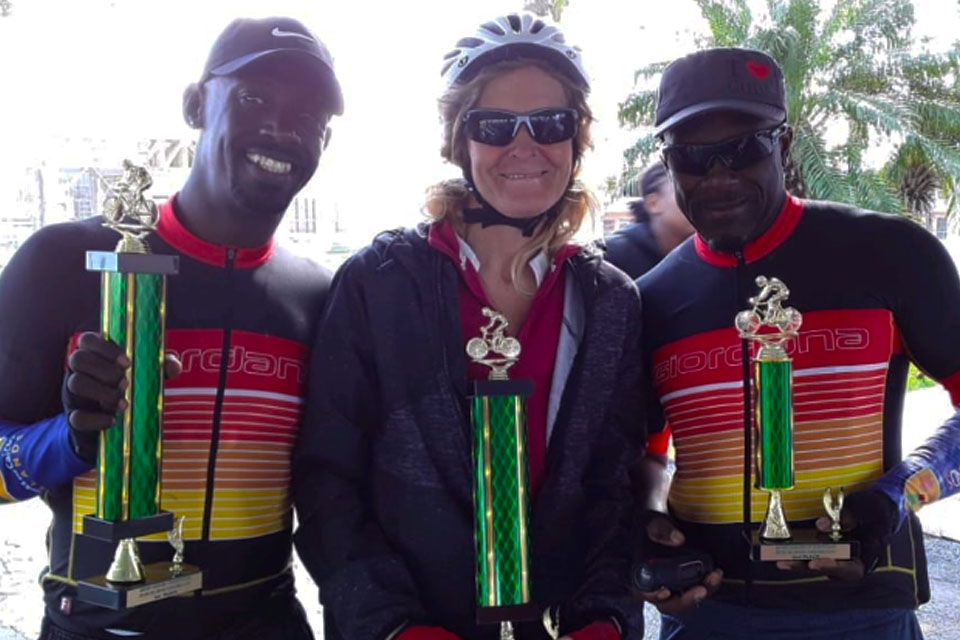 #Providenciales, Turks and Caicos Islands – February 2020 — The 6th Annual Tour of Grand Bahama was held in Freeport Grand Bahama on the 1st and 2nd February 2020. This was a three stage race that included a 3.5 miles individual time trial followed by a 40 miles Circuit race on 1st February with a 62 miles and 86 miles road race for Masters and Elite categories respectively on 2nd February. This championship saw participants from across the Bahama islands as well as Canada and Trinidad and Tobago.

Team TCI consisted of 3 cyclist competing over 2 categories. They included 2019 defending Champion Sean Rodgers who competed in the Elite 2 Category, Kavin Ewing and Devaughn Williams who both competed in the Masters Category. On day 1 of the competition, brothers  Sean Rodgers and Devaughn Williams both captured 1st place in the Individual time trial and the 40 miles criterium race in their respective categories. Kavin Ewing came in a close second to Devaughn in both events.

On day 2 cyclist lined up for what turned out to be a very grueling race. This was due to the 24 Miles an Hour head wind as well as the level of competition at the event. The cyclist from Canada at the event was a semi-pro, former Olympian, while one of the Trinidad cyclist is the current National road race champion. The lineup also included the current Bahamas National Road race and Time trial champions.

After all scores were tallied, Sean Rodgers is now the 2020 champion in the Elite category, with younger brother Devaughn Williams capturing 1st place and Kavin Ewing placing 2nd in the masters category.

TCCF President Shanwell Gardiner stated that this has been a historic performance by the TCCF cyclist, being able to match performances with champion cyclists from around the region and Canada. This is the direct results of lots of hard training and discipline by the TCCF cyclist. We will continue to train hard and make the TCI proud.

The TCCF would like to thank Mr Ralph Dietsche from CBMS, who donated generously to ensure that our team was successful. We will also like to thank the Ministry of sports who was able to donate four brand new TREK bicycles to assist the federation in jumpstarting our school cycling program. These bicycles are greatly appreciated.