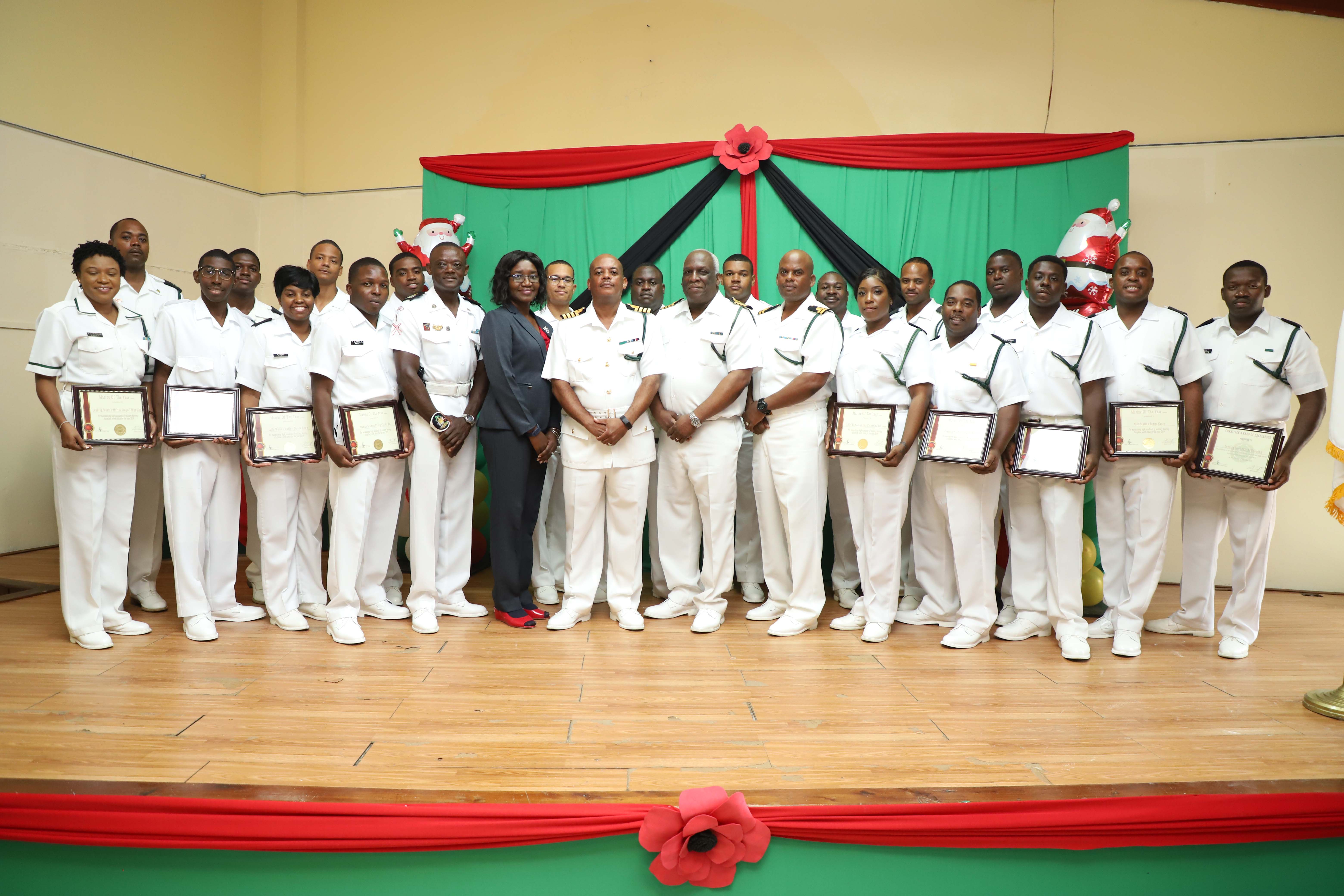 Coral Harbour Base, 23 December, 2019 – Leading Seaman Pherron Rolle of the Royal Bahamas Defence Force walked away with the Leon L. Smith Award as the overall Marine of the Year at the force’s Annual Christmas Carol and Awards Ceremony held on Friday December 20, 2019 at HMBS Coral Harbour. The 15-year-veteran who is a member of the RBDF Band, received the coveted award in honor of the first Bahamian Commodore who headed the Defence Force from 1983 – 1997.

Leading Seaman Roscoe Greene from the Military Police and Force Protection Unit, Able Seaman James Carey from the Training Department and Marine Seaman Deangelo Greene from the Rangers Department received top honors for their respective rates. This year’s format sought to include rewarding Junior Rates in the various ranks.

A total of 29 marines were recognized by their various departments and sub- sections, and received awards for their outstanding and dedicated services throughout the year. Leading Seaman Al Rahming from the Public Relations section was awarded for his tireless work and dedication to the Defence Force.

In attendance was Captain Raymond King, Acting Commander Defence Force. He commended all of the recipients for their performances during the year. He also thanked the Officers and Marines for their invaluable contributions, and admonished them to continue to perform their duties with honor and pride.

Staff, faculty, parents and students from the Gambier and Adelaide Primary Schools were also special guests at the service. They made their presence felt with  musical and poem selections, and the students were afterwards presented with Christmas presents.

The Annual service, which is also a time of reflection and thanksgiving during this festive season, brings together personnel from all sectors of the force. RBDF Chaplain, Reverend Prince Bodie, who brought the Christmas message reminded those in attendance that Jesus came to this Earth for all of us, and for us to have eternal life, we must first receive His gift – Jesus Christ.

Header: The 2019 honorees and winners of the 2019 RBDF Marines of the year Awards at the force’s Annual Christmas Carol and Awards Ceremony on Friday December 20, 2019 at the Defence Force Base.

Insert: The students of Gambier Primary School with their gifts during the force’s Annual Christmas Carol and Awards Ceremony on Friday December 20, 2019 at the Defence Force Base.