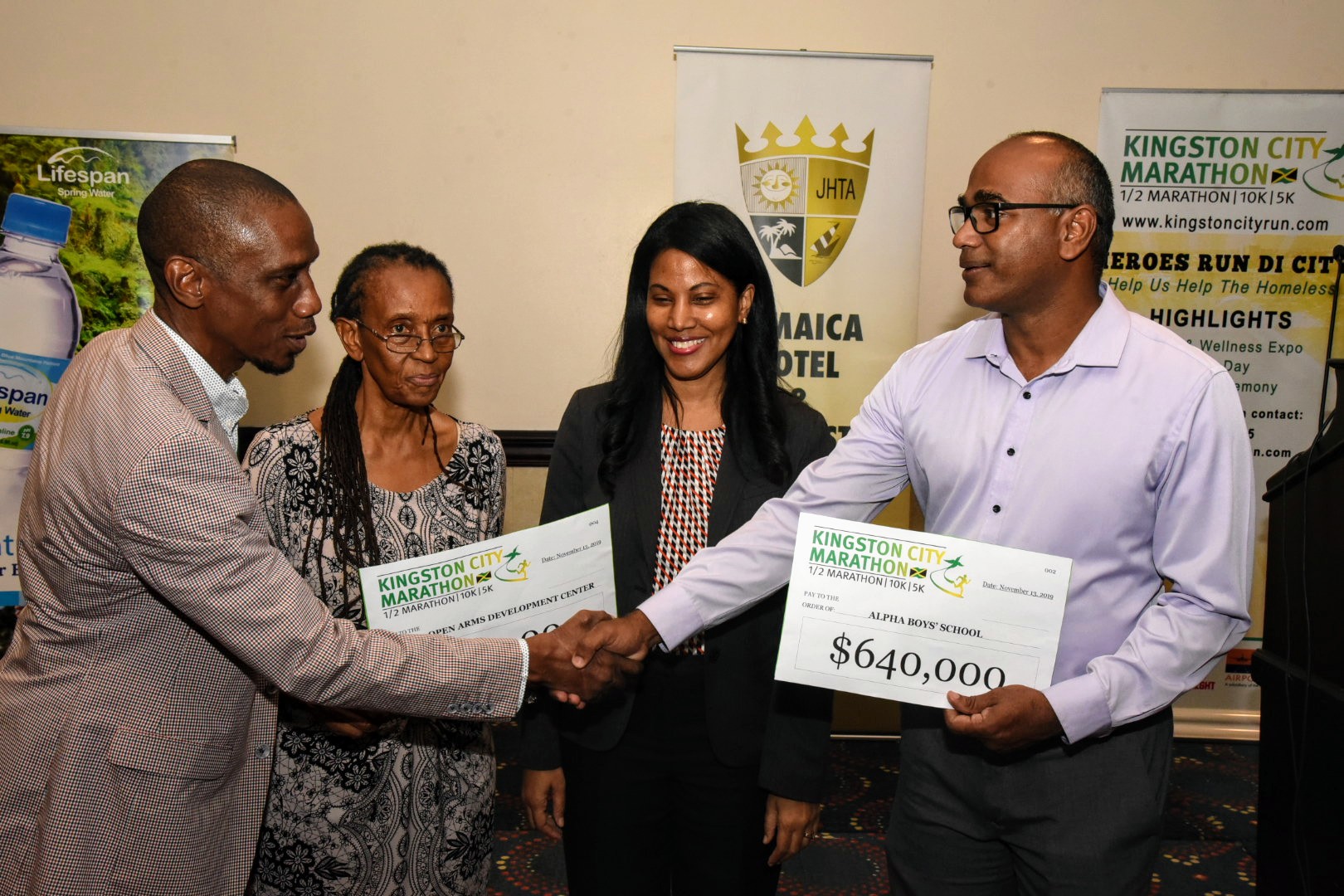 #Kingston, November 19, 2019 – Jamaica – Five charities catering to homeless and marginalised persons across the Corporate Area have received donations totalling $3.2 million from the organisers of the annual Kingston City Run and Marathon.  The amount represents the proceeds from this year’s staging of the event in March.

Cheques valued at $640,000 each were handed over to the Marie Atkins Night Shelter, Open Arms Development Centre, Alpha Institute, Food For the Poor, and Missionaries of the Poor, during a ceremony at The Jamaica Pegasus hotel in New Kingston on Wednesday (November 13), where the 2020 renewal of the Marathon and City Run was launched.

Speaking at the ceremony, road race Co-Founder and Co-Chair, Nicola Madden-Greig, said the organising committee is “very excited to be able to present these funds”, noting that the recipients have been the beneficiary charities since the event’s inception in 2013.

“We selected those charities because [they] have worked over the years to definitely help those who are most disenfranchised, especially the homeless, which is a very special effort for us as the committee members,” Mrs. Madden-Greig said.

She thanked “all our sponsors, partners and participants… all the persons who ran and walked the races… because, with their support, we were able to garner these funds”.

Chief Executive Officer for the Kingston and St. Andrew Municipal Corporation (KSAMC), which oversees the management of the Marie Atkins Night Shelter, Robert Hill, expressed gratitude for the support.  He said the donations over the years have facilitated, among other things, the construction of recently completed walk-in shower facilities at the shelter “which are absolutely essential to serving our homeless population”.

He said that support provided through initiatives like the Kingston City Run and Marathon, are welcome interventions.

More than $21 million has been raised for beneficiary charities from the Kingston City Run and Marathon over the past seven years. The 2020 staging of the event is slated for the weekend of March 13 to 15.

The Kingston City Run and Marathon, which initially comprised a half marathon, and a 5K and 10K run/walk, was expanded to include a marathon this year.

Header: Co-Chair Kingston City Run and Marathon, Christopher Jarrett (left), shakes hands with Development Officer for the Sisters of Mercy/Alpha Institute, Charles Arumaiselvam (right), after presenting him with a cheque in the sum of $640,000, representing part proceeds from this year’s staging of the event. The presentation was made during a ceremony on Wednesday (November 13), at The Jamaica Pegasus hotel in New Kingston, where the event’s 2020 renewal was launched. Looking on (from second left) are Administrator at the Open Arms Development Centre, which also benefited from funds, Yvonne Grant; and Kingston City Run and Marathon Co-Chair and Co-Founder, Nicola Madden-Greig.

Insert: Kingston City Run and Marathon Co-Chair, Christopher Jarrett (left), and Co-Chair and Co-Founder, Nicola Madden Greig (right)  present a cheque in the sum of $640,000 to Administrator of the Marie Atkins Night Shelter, Mavis Farquharson, during a ceremony at The Jamaica Pegasus hotel in New Kingston on November 13. The sum represents part of proceeds from this year’s staging of the event.