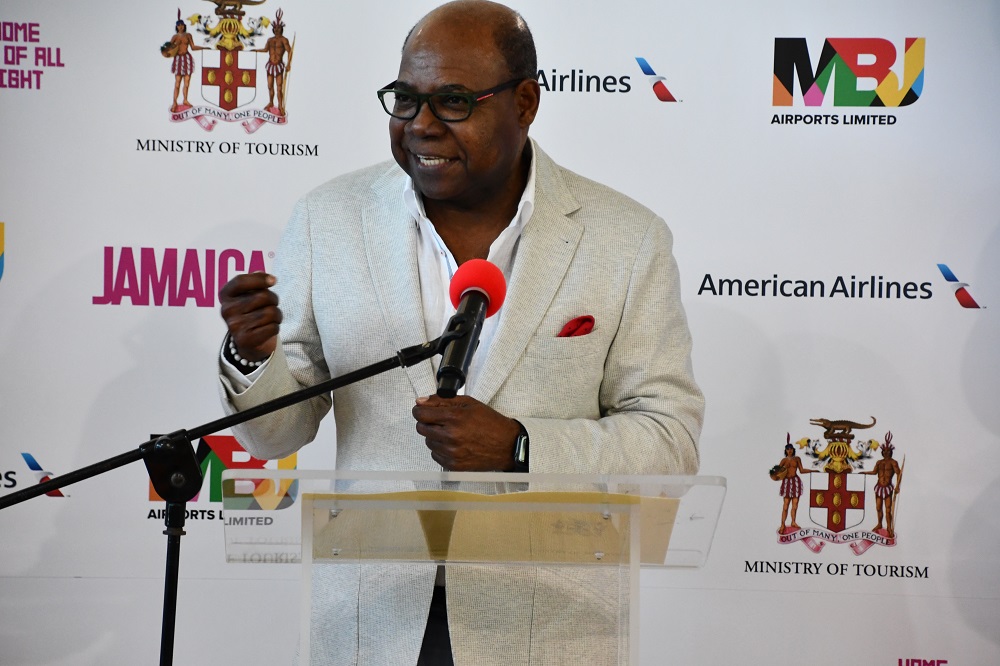 Montego Bay, November 25, 2019 – Jamaica – Tourism Minister, Hon. Edmund Bartlett, says American Airlines will be sending 15 flights into Montego Bay every Saturday, starting December.  He said the move represents a record for any single carrier and will ensure that Jamaica’s tourism continues to soar, “moving us closer to achieving the target of five million visitors by 2021”.

Minister Bartlett, who was speaking to JIS News following a welcome reception for the resumption of American Airlines’ daily service from New York’s John F Kennedy (JFK) Airport to Montego Bay, on Thursday (November 21), said the development is a strengthening of the relationship between Jamaica and one of America’s most prestigious airline carriers.

He noted that American Airlines offers its 200 million customers 6,800 daily flights to more than 365 destinations in 61 countries per year, from its hubs in Charlotte, Chicago, Dallas-Fort Worth, Los Angeles, Miami, New York, Philadelphia, Phoenix and Washington DC.

“I’d like to say how pleased we are to have American Airlines as a tourism partner as we seek to grow Jamaica’s tourism.  Based on the airline’s track record of growth and performance, we’re confident that we can look forward to a sustained and mutually beneficial partnership,” he said.

Mr. Bartlett said he will be having dialogue with the airport management on how to manage the expected boom in arrivals.

“Weekends are very strong for Jamaica. We are going to be challenged because that level of rotation from a singular carrier is going to tax the capacity here, so we are going to have to look at how we have to improve and expand and to create a greater level of seamlessness in our operations,” he pointed out.

Meanwhile, Minister Bartlett noted that while the United States remains Jamaica’s primary source market, representing more than 60 per cent of visitor arrivals to the island, the Ministry will be seeking other markets.

“It is always important to spread our wings and improve on our arrivals. With an aggressive mindset, we are marketing to Europe, Asia and the Middle East,” he said.

He said that increased flights are expected out of South American through arrangements with carrier LATAM.

“When LATAM comes on stream, Jamaica will be the only English-speaking Caribbean country that will have that level of connectivity from the entire Americas – both North and South,” he noted.

For his part, United States Ambassador to Jamaica, Donald Tapia, said that the countries have had a great and long history of diplomatic relations, which includes strong airlift arrangements.

“Today is another representation of the strong ties between both countries, which will positively impact Jamaica’s tourism and our largest carrier,” he said.