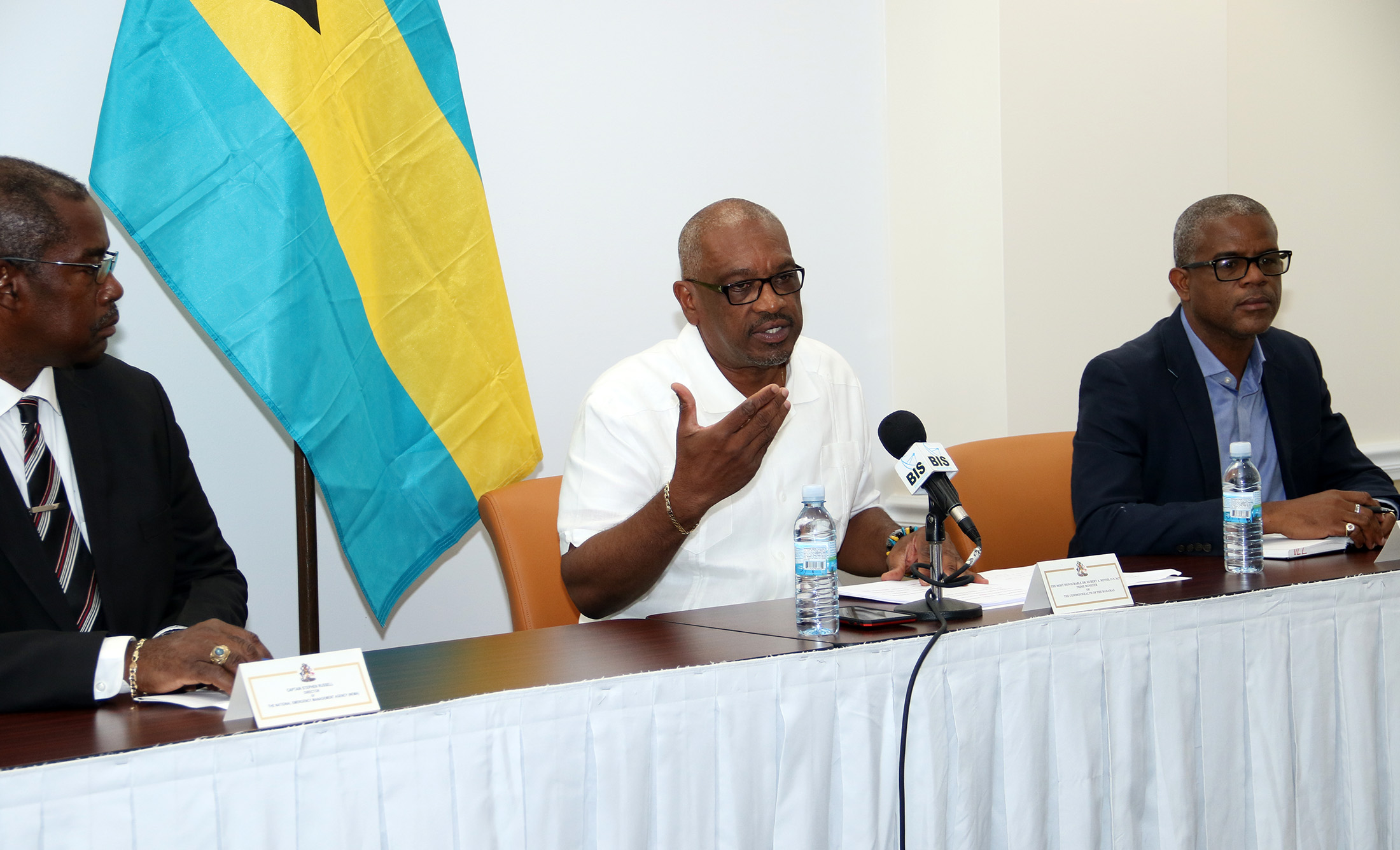 This, he revealed at a Press Conference held at the Office of the Prime Minister on Sunday, November 3, 2019.  Also present were Captain Stephen Russell, Director of the National Emergency Management Agency, NEMA; and John Michael Clarke, Co-chair of the Reconstruction Committee.

The Prime Minister was fresh from Abaco where he held a series of town hall meetings on Green Turtle Cay, Guana Cay, Man-O-War Cay and Elbow Cay.

He was accompanied by Abaco Members of Parliament — Foreign Affairs Minister Darren Henfield and Parliamentary Secretary in the Office of the Prime Minister James Albury — also Minister of State in the Ministry of Disaster Preparedness Management and Reconstruction Iram Lewis; and representatives of the Department of Inland Revenue and Bahamas Customs.

“I plan to hold regular town hall meetings throughout communities affected by Hurricane Dorian, in Abaco and Grand Bahama, as we continue recovery and reconstruction,” the Prime Minister said.

“I will resume my regular schedule of town hall meetings throughout the country to update residents on national developments,” he added.

The Government is also looking into creating The Bahamas National Recovery and Reconstruction Trust Fund.

“This Trust Fund will be an independent and non-political body to help fund home and building repairs,” the Prime Minister said.

He explained that the proposed Trust Fund will provide the most vulnerable residents affected by natural disasters with up to a $10,000 grant per household to assist families by providing building supplies, labor or some combination of both.

A committee of subject matter experts will help to operationalize the Fund’s efforts and to connect public and private stakeholders.

The Government will provide the initial funds to start-up the Trust.

“However, this private independent trust will be responsible for collecting and distributing funds for recovery efforts to ensure transparency and full accountability,” the Prime Minister said. “We will provide more details about the Trust as it develops.”

The Prime Minister reiterated that the previously announced VAT Relief Policy applies to Abaco, the Abaco Cays and Grand Bahama until June 2020.

“Under this new policy, individuals and businesses in the areas impacted directly by Hurricane Dorian will be exempt from the payment of Value Added Tax on a range of items related to reconstruction, rehabilitation and everyday consumption,” he said.

The Government also plans to establish a $1.5 million-dollar loan and grant program to assist farmers, fishermen and those in the boating industry in the Special Economic Recovery Zones of Abaco and Grand Bahama,” the Prime Minister said.

“We are making other progress on the ground across Abaco and Grand Bahama,” said the Prime Minister.

To advance its clean-up program and Debris Management Plan for Abaco and Grand Bahama, the Ministry of Housing and the Environment has formalized a Memorandum of Understanding with the United Nations Development Program (UNDP).

Under the MOU, the UNDP will assist with monitoring, evaluation and technical assistance.

Photo Captions: Prime Minister Minnis held a Press Conference at the Office of the Prime Minister on Sunday, November 3, 2019.  He continued his updates on the recovery process on Abaco and its cays and East End, Grand Bahama – the areas impacted by Hurricane Dorian in September 2019.  Pictured from left are Captain Stephen Russell, Director of the National Emergency Management Agency; Prime Minister Minnis; and John Michael Clarke, Co-chair of the Reconstruction Committee.