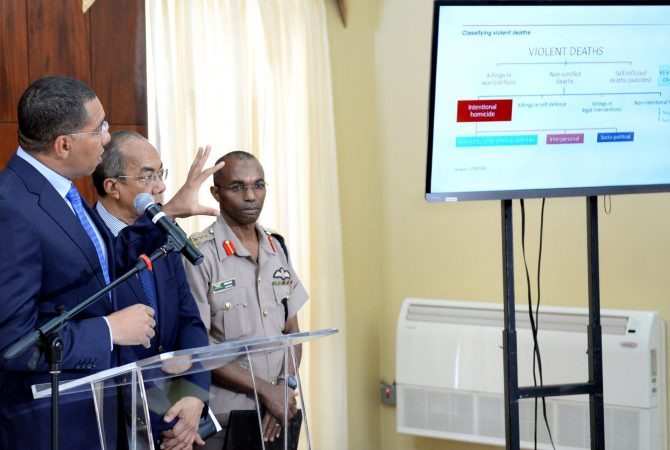 #Jamaica, October 14, 2019 — Ten years ago, Jamaica recorded its highest murder rate within a decade with some 1,680 homicides in 2009.  Ten years on, and two years after a murder count of 1,616 people (second highest in 10 years), the country is trending downward, significantly.

It is widely believed that the Jamaican Government’s bold interventions curtailed the killings and the murder count has decreased in some areas, like St. Thomas by 32 percent.

It is still heartbreaking that hundreds of people have died to violence of some kind in what is the third largest English speaking country in the Western Hemisphere and the largest one in the Caribbean, but many take heart in the fact that based on trends, one can surmise that likely 300 people will not be killed.

So, what happened to cause this reduction?

The answer is bold initiative including declaring a State of Public Emergency (SOE) in several crime-ridden districts and parishes – St. James, Hanover and Westmoreland are among them – and that meant curfews and other drastic controls and powers were enacted for those areas.  Not only did the Jamaican government do it once, but over and over again in both 2018 and 2019 because, they say, it is working and has not hurt tourism.

Loop News Jamaica reported in October 2019 that Dr. Horace Chang, Minister of Security is completely persuaded that the State of Public Emergency has saved lives, when social programmes did not.

“The first time we had a significant fall that has saved well over 200 Jamaican lives and stopped the mayhem and slaughter on the streets of Montego Bay, that was the introduction of the state of emergency,” the security minister explained while speaking at a Violence Prevention and Peace Building Symposium.

Also in October, it is reported that those SOEs, were extended.

“It is a solution that has yielded results, and we are well aware of the challenges and the downsides to the SOEs,” he added that despite skepticism, “We have saved, by virtue of the collective action of this House by putting in place the SOE: 30 lives. There were 51 shootings in the 84 days before the SOE – that is down to 27.

Murders in the area were cut by half said the Prime Minister.

Jamaica leads the Caribbean region in murders, has seen a spike in gun violence in 2019 and reports are that 70 percent of crime is linked to illegal drugs.

The State of Public Emergency gives the security forces temporary additional powers, including powers of search, arrest and detention.  Security forces can also curtail operating hours of business, restrict access to places and detain individuals without a warrant.

Over 440 Years of Thanksgiving Day for Canada, today

Trump Administration decision dashes hopes of getting to USA for over 8,300 Haitians and Filipinos