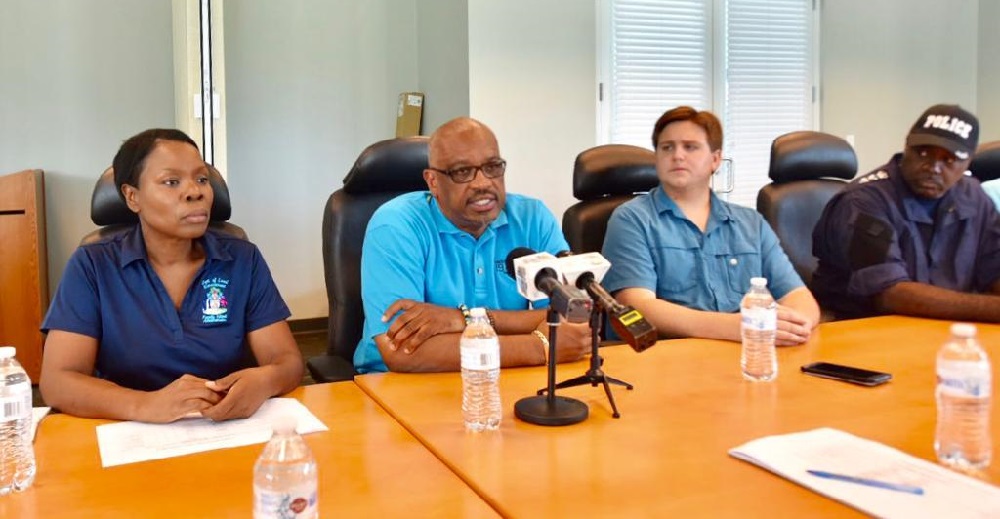 #Abaco, September 1, 2019 – Bahamas – Prime Minister the Most Hon. Dr. Hubert Minnis attended a press briefing for residents of Abaco today and checked in on the progress of the island’s preparations for Hurricane Dorian, an extremely dangerous and powerful Category 4 storm approaching the Northwest Bahamas.

The visit was part of The Prime Minister’s final appeal for residents of the northern cays and the northern mainland to seek safe harbour in south Abaco.

Hurricane Dorian is a major threat to portions of the northwest Bahamas, particularly Abaco and Grand Bahama, which are under a Hurricane Warning. Residents of vulnerable areas of those islands are being urged to get out of harm’s way.

The Prime Minister also urged residents of the Pigeon Pea, Mud and other migrant communities on Abaco to wait out the storm in the safety of shelters on the island, which were fully activated on Saturday afternoon.

“Right now, our only concern is ensuring that every resident is safe during the storm. We are not concerned with differences. We are all one. I am pleading with those in low-lying areas to evacuate now before it is too late,” said Prime Minister Minnis.

According to the National Hurricane Center, “a prolonged period of life-threatening storm surge, devastating hurricane-force winds, and heavy rains capable of life-threatening flash floods are expected on the islands of Abaco and Grand Bahama Sunday through Monday.”

Forecasters are particularly concerned about the storm’s projected slowdown of forward speed as it moves over Grand Bahama.

In Grand Bahama, residents of East End, West End, Sweeting’s Cay and Water’s Cay are being urged to relocate to the interior of the island. All shelters have been activated and a shelter for special needs residents has been set up at Christ the King Anglican Church.

The storm surge from Hurricane Dorian is expected to reach 12-15 feet and may possibly increase due to the current spring tide. The surge combined with potential wind exposure may result in severe damage to communications and power systems. At the 8pm update, Hurricane Dorian had sustained winds of 150mph.

All residents under the Hurricane warning area – which also includes North Eleuthera, Abaco, Grand Bahama, Bimini, the Berry Islands and New Providence – should listen to the advice given by NEMA and the relevant government agencies. Hurricane preparations should already be completed.

Based on the projected path, residents of Abaco may start experiencing storm conditions by 2am Sunday, and on Grand Bahama, around 6am, according to forecasters.