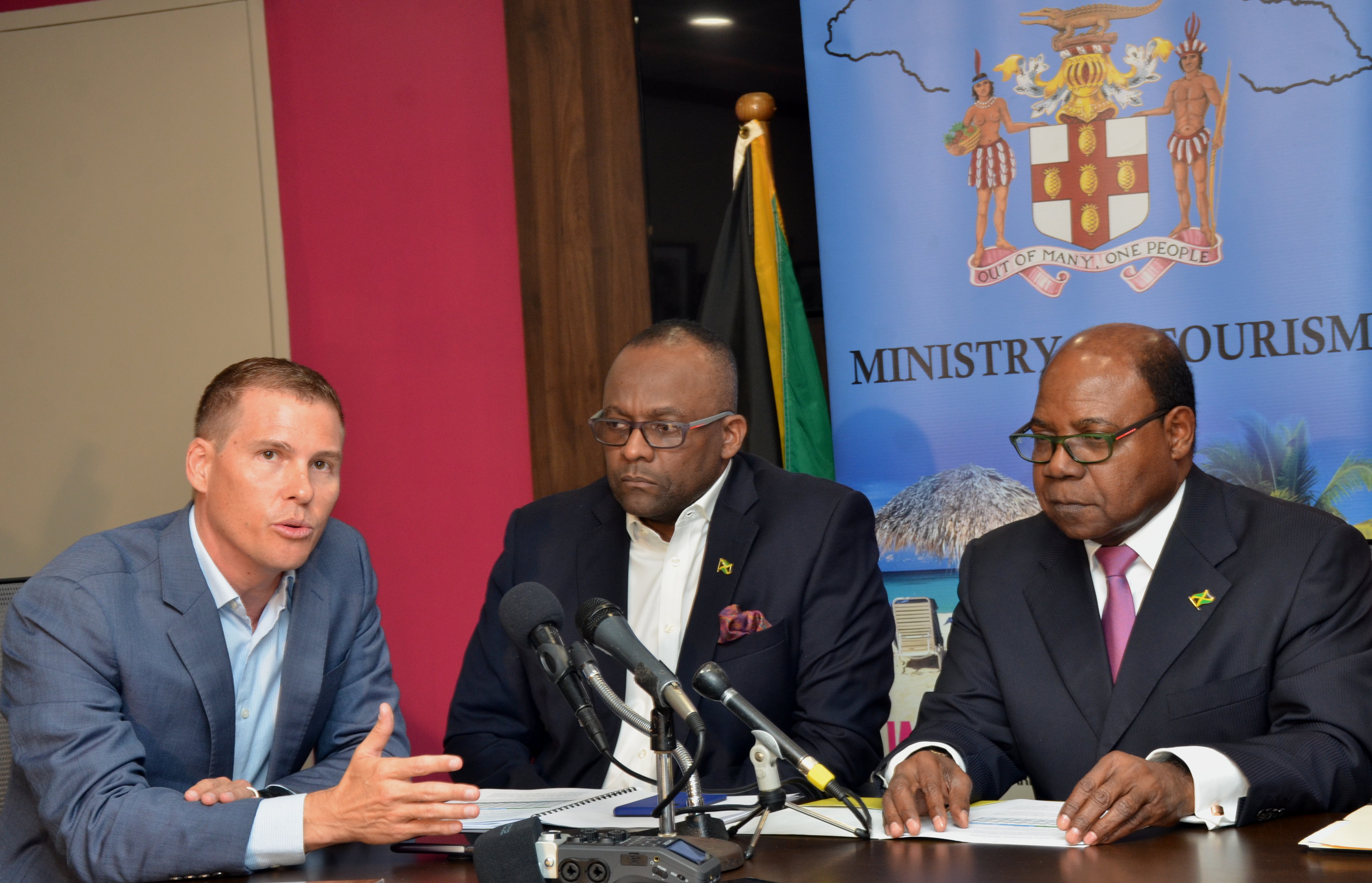 #Kingston, September 4, 2019 – Jamaica – The Ministry of Tourism, through the Global Tourism Resilience and Crisis Management Centre (GTRCMC), is moving to mobilise resources locally and internationally to assist The Bahamas in the wake of the devastation caused by Hurricane Dorian.

Along with the resources that are expected to be provided by local tourism stakeholders to assist the hurricane-wrecked island, the Tourism Ministry will be lobbying for further support from the international community at the upcoming United Nations World Tourism Organization (UNWTO) Conference in St. Petersburgh, Russia, from September 9 to 13.

Dorian, one of the most powerful Atlantic storms on record, hit the Caribbean island late Sunday (September 1) evening as a category-five system before it was downgraded to category 3, leaving behind at least five people dead and destroying infrastructure and hundreds of homes on two islands.

Minister of Tourism, Hon. Edmund Bartlett, speaking at a press briefing on Tuesday (September 3) at his New Kingston office, said that the GTRCMC was established to respond to unfortunate occurrences like Dorian, which significantly impact the tourism industry within the Caribbean region.

The centre, he noted, was established to build resilience and capacity to withstand these disruptions, but more so, to enable quick recovery and ensure that the sector thrives in the aftermath.

“And so it is against that background that, today, we have begun the process from the centre, to reach out to the global tourism community to mobilise resources to support … our neighbor,” the Minister said.

“And so as the first step, I’ve been in touch with our colleague Minister (Dionisio) D’Aguilar in The Bahamas, about the situation overall and the second response was to get to our local partner, which is the Jamaican homegrown tourism enterprise that has footprints all over the Caribbean, including The Bahamas,” he added.

In this regard, Minister Bartlett said the Sandals Foundation, which had already started to mobilise its own response, has agreed to partner with the Ministry.

Additionally, he said he is in discussions with another Caribbean enterprise, which will be coming on board.

Deputy Chairman of Sandals Resorts International and Chairman of the Tourism Linkages Council, Adam Stewart, said that the Foundation, which is Jamaican-based, has sought assistance from its partners, including bankers, airlines and tour operators, and the support “has been rolling in”.

Already, he said, Mayberry Investments Limited has donated $1 million and another partner has provided US$100,000 worth of cleaning supplies.

Meanwhile, Minister Bartlett said he will be presenting the case for further collaboration with the GTRCMC in order to strengthen its capacity to deal with vulnerabilities within the Caribbean at next week’s UNWTO Conference.

“In the process, I will be supporting The Bahamas in their own recovery effort and … ensure that full appreciation of the extent of the damage and the extent of support that is required is realised by all of the partners, who will be coming from about 120 countries from across the world to the meeting in St. Petersburg,” he said.

Minister Bartlett underscored that the centre will not affect the work of other recovery agencies and activities within the region, as the facility’s efforts are focused on tourism recovery.

“Our focus is going to be on how we enable the tourism sector within these areas that are impacted to recover quickly and to thrive thereafter.   And I wanted to make that point, because we are going to be working very closely with the CDEMA in our regional arrangement,” he said.

Header: Minister of Tourism, Hon Edmund Bartlett (right); and Tourism Director Donovan White, listen to Deputy Chairman of Sandals Resorts International and Chairman of the Tourism Linkages Council, Adam Stewart, at a press briefing at the Ministry of Tourism offices in New Kingston on Tuesday (September 3).

Insert: Minister of Tourism, Hon Edmund Bartlett (right), makes a point during discussion with (from left) Project Manager for the Sandals Foundation, Karen Zacca; Tourism Director, Donovan White; and Deputy Chairman of Sandals Resorts International and Chairman of the Tourism Linkages Council, Adam Stewart, following a press briefing at the office of  Ministry of Tourism in New Kingston on Tuesday (September 3).