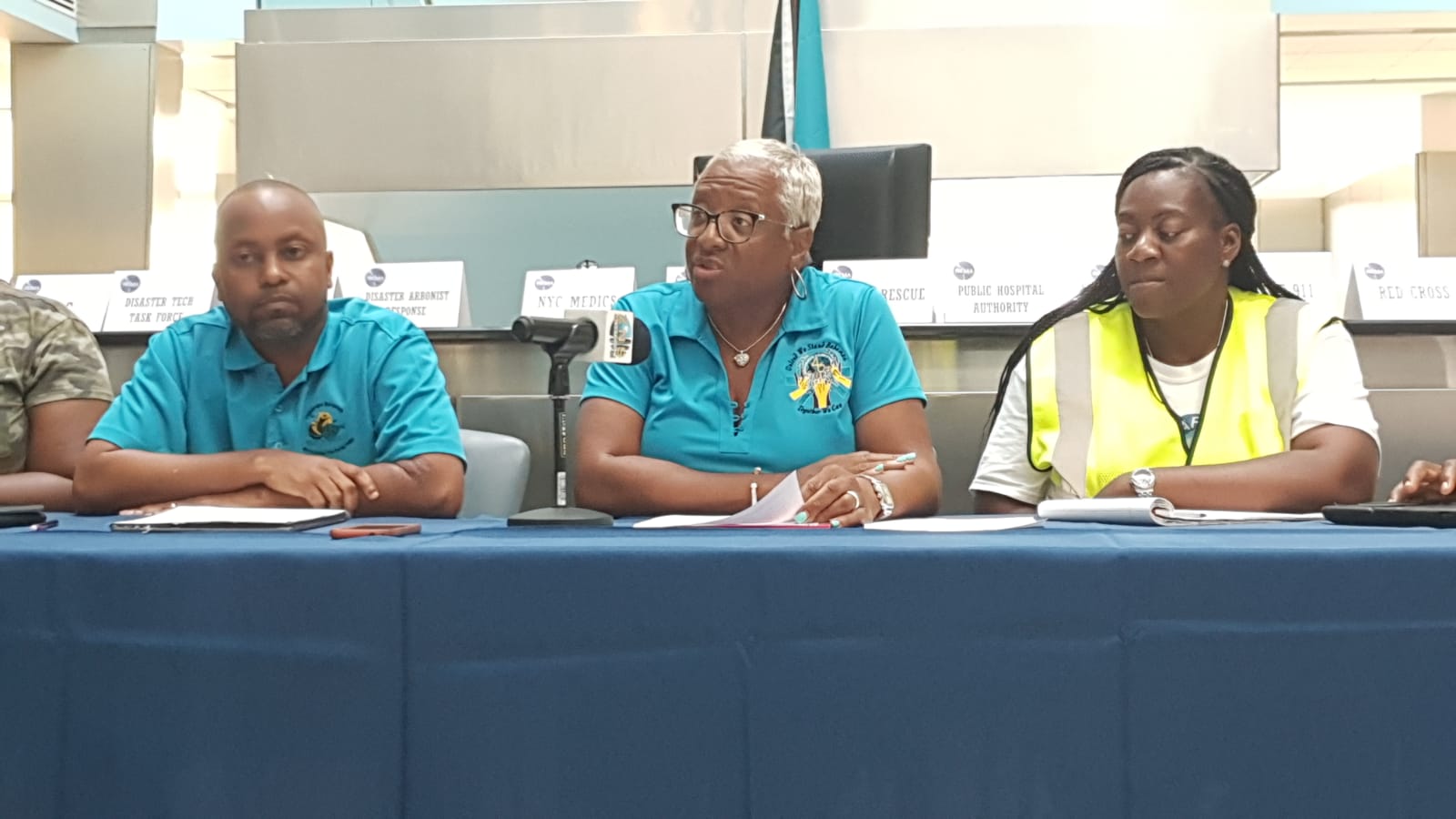 #Freeport, GB, September 19, 2019 – Bahamas – A more efficient system to deal with the influx and distribution of the much-needed hurricane relief supplies is in place, along with many volunteers and organizations to better assist the affected residents of Grand Bahama and surrounding cays following the passing of Hurricane Dorian, said newly-appointed Coordinator for NEMA Grand Bahama, Senator the Hon. Katherine Forbes-Smith during a live press conference at NEMA headquarters in the C.A. Smith Building on Monday.

Noting that it was her sixth day since having been appointed to the position, and 16 days since Hurricane Dorian ravaged the island of Grand Bahama, Senator Smith said that as soon as the ‘all clear’ was given, teams were mobilized to search, rescue and recover.

“Emergency security, food, water and other resources were deployed as quickly as was possible once the all-clear was given, so that first responders and aid workers were not put at risk in harm’s way. Shortly thereafter, additional aid, in the form of supplies and volunteers from all over the globe started arriving to Grand Bahama. The outpouring of generosity and caring has been, and continues to be, truly remarkable. As we move forward with the relief operation, we ask that all residents of Grand Bahama remain focused on caring for the needs of our people and ultimately rebuilding our community. Now is the time that we all need to pull together as one, and be strong and supportive neighbors for each other.”

“As of today, NEMA has set up a warehouse in Freeport to receive shipments of donated food, water and other supplies intended for Grand Bahama, and our goal is to establish at least two more warehouses in the coming days. It is imperative that we do our absolute best to process the supplies and aid in a very efficient manner. Supplies, such as food and water, in a warehouse do us no good unless we can quickly get them inspected, sorted and packaged for delivery or pick up.”

Assisting with this are the United States Coast Guard and the United Nations Office for Coordination of Humanitarian Affairs, or OCHA — all experts in logistics, warehouse management and distribution.

Also assisting with this mammoth task are dozens of volunteer organizations, NGOs, and faith-based organizations who all help with the distribution of food, water, medical care and other necessities in those communities most affected.

Senator Smith thanked all those who have given time, money and resources so generously and added, “To that point, let me also humbly mention that we will continue to need assistance and donations as we pull ourselves up and begin rebuilding Grand Bahama, rebuilding our future. It may seem premature to some to think about rebuilding, but that’s really the ultimate objective of any disaster recovery – to restore people’s lives, and livelihoods, back to normal.

“Bahamians are strong and resilient people. We know that even the largest, most destructive hurricane cannot destroy our spirit. And, thanks to so many wonderful and caring people and organizations, we are on the path to rebuilding. We as a community, and as a nation, must remain focused on serving the needs of our citizens and rebuilding our local economy. To that point, we would strongly discourage any form of price gouging as that only hinders the rebuilding effort.”

Focus is also on the removal of debris from roads and neighborhoods as well as de-mucking homes. Mold remediation on structures that have flood and water damage will also have be dealt with. Senator Smith noted that there are volunteers and organizations dealing with this.

Also, of note was the presence of a team from the Ministry of Public Works who will begin assessing damage to assist NEMA Grand Bahama prioritize rebuilding efforts.

Minister of State for Grand Bahama, Senator the Hon. Kwasi Thompson, was also present giving details on the operation of various government departments. The Office of the Prime Minister is now open daily from 9am to 12pm, while many government agencies have a representative present at the C.A. Smith Building.

In closing, the Grand Bahama native urged Bahamians to remain strong as there are many from around the world assisting residents to rebuild.

“As we move forward, we will be sharing lists of what we need most for the relief effort – and encourage cash donations to the government’s disaster relief fund or to reliable NGOs to help us with the long-term rebuilding.   All of us at NEMA Grand Bahama are very optimistic about the progress we have made in just a few short days. NEMA will open two more warehouses soon to help process the growing amount of relief supplies that we are taking in, and then processing out.

“In fact, this past Saturday, in what we called ‘Operation Relief Saturday,’ volunteers and NEMA staff assembled hundreds of boxes of basic supplies – including food, water and hygiene products and then delivered them directly, door to door, in the Hawksbill and Regency Park neighborhoods.

“In addition, as you heard today, we are pleased to report that the Ministry of Public Works has arrived today and will begin the process of assessing damage to help us prioritize rebuilding efforts while we at NEMA Grand Bahama work to ensure residents have access to food, clean water and shelter.

“We are committed to providing regular updates, in full transparency, so that all of our community are aware of developments and progress we are making in rebuilding our great island of Grand Bahama.  We applaud each and every one of you for your dedication, compassion, and commitment to our nation. This is not just a whole-of-government response, but a whole-of-community endeavor.  Let’s rebuild Grand Bahama together and make it better than ever!”

Header: President of the Senate and newly-appointed NEMA Grand Bahama Coordinator, the Hon. Katherine Forbes-Smith, on Monday, September 16, 2019 told a live press conference that a more efficient method of dealing with the influx and distribution of hurricane relief supplies is now in place. Also shown are Minister of State for Grand Bahama, Senator the Hon. Kwasi Thompson; and NEMA Supplies Manager, Tammi Mitchell.