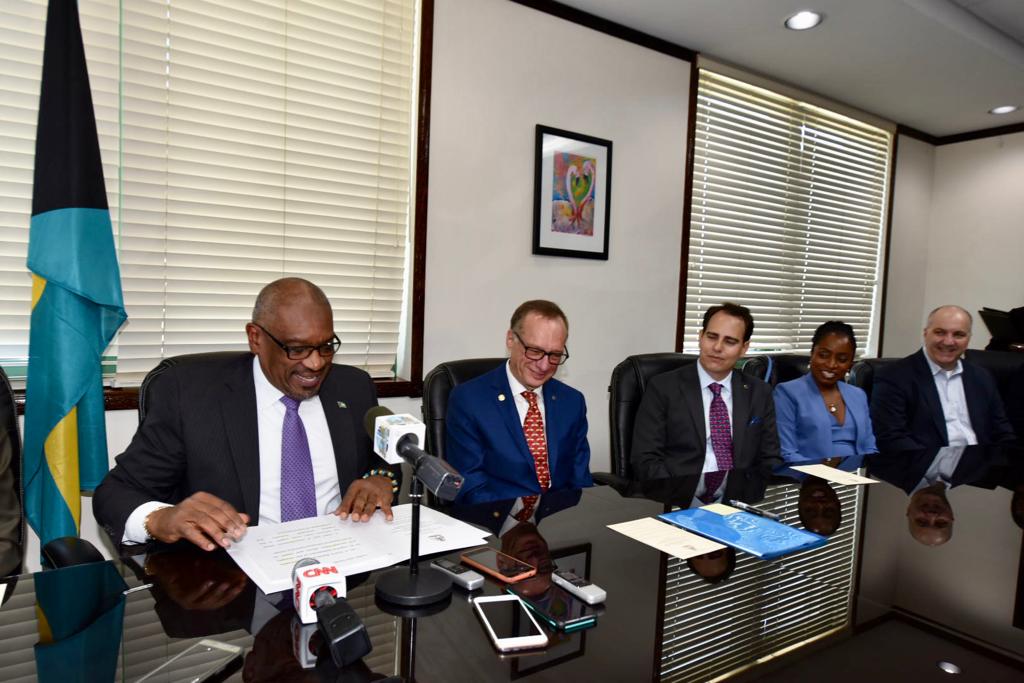 #Freeport, GB, September 26, 2010 –  Bahamas – The Government today signed two separate heads of agreements with Carnival for the $100 million-dollar development of a cruise port in Sharp Rock, Freeport, and an $80 million-dollar expansion of Half Moon Cay.

Prime Minister the Most Hon. Dr. Hubert Minnis noted the significance of the Freeport signing in the restoration and recovery of Grand Bahama following Hurricane Dorian.

“A major part of reconstruction, which has become even more urgent, is the ongoing economic recovery and revitalization of Grand Bahama,” said Prime Minister Minnis

“The Government expected to sign a Heads of Agreement with Carnival Grand Bahama Investment Limited and the Carnival Corporation for a new cruise port a few weeks ago. Because of Hurricane Dorian the initial date for signing had to be postponed. I am pleased that we are able to have today’s signing to help in the restoration and recovery of Grand Bahama.”

The Carnival Corporation has agreed to develop a new island destination on Grand Bahama on 329 acres of land in Sharp Rock. The cruise port will be the largest Carnival Cruise Port in the world.

The new cruise port will lead to significant job creation in the construction phase as well as long-term, said Prime Minister Minnis.

“There will be significant opportunities for business development and entrepreneurship by Bahamians.   The new port will result in greater Bahamian ownership in terms of a range of business opportunities,” said the Prime Minister.

When completed, the new port is expected to bring millions more tourists to Grand Bahama each year.

The Government also signed an agreement with Carnival for the further development of Holland America Line’s Half Moon Cay (Little San Salvador). The expansion includes the construction of a cruise pier on the north end of Half Moon Cay, as well as supporting landside facilities at the pier site.

The capital investment will total $80 million, and will include the construction of aquatic facilities, beach restoration, restaurants and nightclubs, a shopping plaza, sports and entertainment facilities, nature trails and the development of park and/or natural reserve areas.

Both heads of agreements will be tabled in the House of Assembly.

“In order to rebuild Abaco and Grand Bahama, we have to spur economic development throughout the country,” said Prime Minister Minnis.

“We must also accelerate economic projects on Grand Bahama and begin rebuilding on Abaco as soon as is possible.”