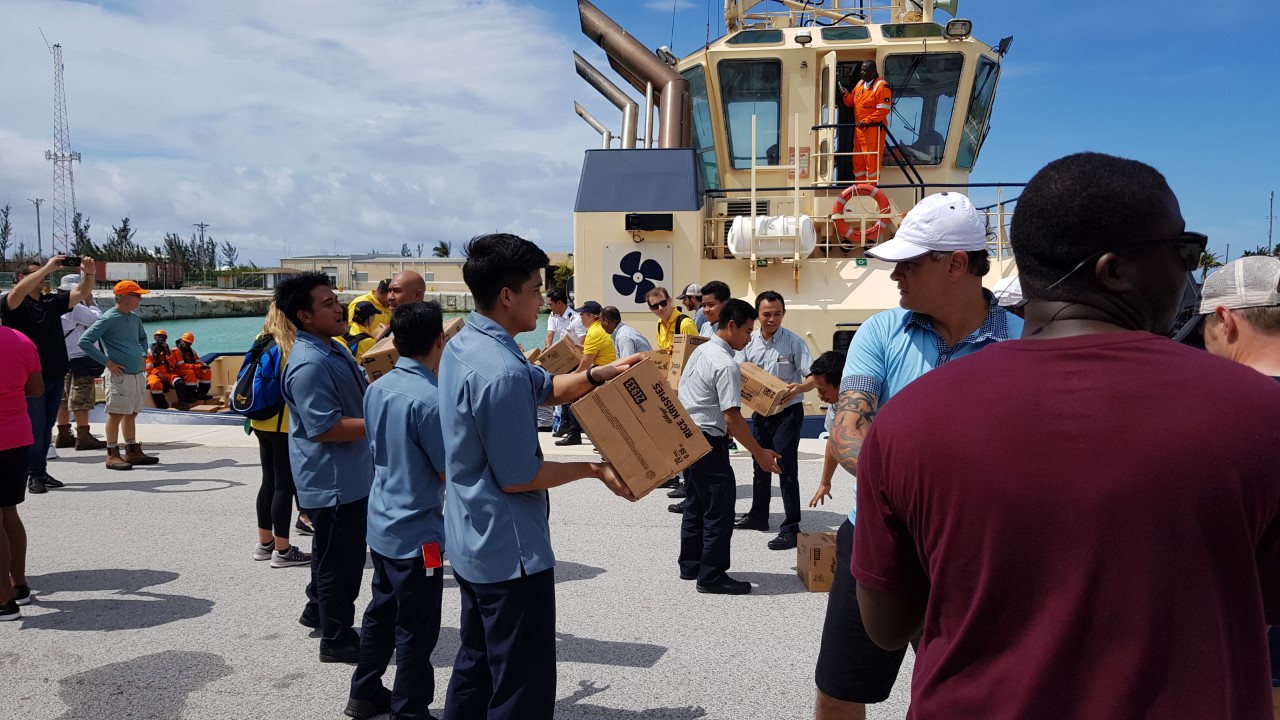 #Freeport, GB, September 6, 2019 – Bahamas – International supplies for the residents of Grand Bahama who had been devastated by Hurricane Dorian began arriving in today, as Royal Caribbean Cruise Line brought in 10,000 cooked meals and water, along with boat loads of other food items and supplies.

Members of the international press were on hand for the arrival of the goods at the Freeport Harbour on Thursday morning.

“This is a coordinated effort on between Royal Caribbean Cruise Line and NEMA in Grand Bahama to assist victims of Hurricane Dorian disaster,” said President of the Senate, the Hon. Katherine Forbes-Smith, who is assisting the Government and NEMA in their restoration efforts.

“Royal Caribbean is one of our international partners who has had a working relationship with The Bahamas for some 40 years. So, they wanted to reach out and do what they could to assist Grand Bahama during this time.”

According to Alex De Roeck of Royal Caribbean, the effort is not a one-time affair.

“We will be delivering these 10,000 meals every day during the duration of this effort to be of service to the Grand Bahamian people,” said De Roeck, who works in hotel operations, RCCL Miami. “We will be diverting our cruise ships to this port every day to ensure that this effort continues.

“What will be happening is, we will provide the items and deliver them, but local Emergency officials will decide where they are to be delivered and distributed.

Thursday’s delivery of food items and supplies was accomplished by the Empress of the Seas.  Because of the possibility of debris in the water, the cruise ship did not dock at the harbor, but out to sea, where tug boats loaded the supplies and delivered them to waiting trucks on the dock.

Alex noted that this kind of humanitarian effort is a part of Royal Caribbean’s operational profile. Adding that the relationship between Royal Caribbean and the Bahamas has been a long, established one. “So, we try to reinvest in the local community and also try to assist that community when things like this happens.

“Because we have this long relationship with the islands, we want to do our part to support them and to get them back on their feet.”

While Royal Caribbean has most of its ships ported in Nassau, Alex said that the cruise line will use a different ship each day to make the trip to Grand Bahama to deliver the 10,000 meals.

He added that the company is seeking to set up a feeding kitchen on the island, but said that option was not concrete, as they have to work with NEMA to discuss the feasibility and location of such a kitchen.

Other items being donated by Royal Caribbean – in addition to the meals – include generators, blankets, towels, tissue, cereals, canned goods and other dry goods.

The joint effort was one which Minister of State for Grand Bahama, Senator Kwasi Thompson had made mention of during his live update on ZNS on Wednesday evening, when he noted that a number of international companies, corporations and individuals have expressed their interest in doing what they can to assist Grand Bahama during this time of natural disaster.

“We have been in contact with many of those people and there is a huge desire by our international friends to do what they can to help us,” Minister Thompson said on Wednesday night. “Through NEMA, we are organizing to properly bring in the aid that is being offered and to ensure that they are properly distributed to the residents of Grand Bahama.”

Minister Thompson, along with Deputy Prime Minister, K. Peter Turnquest and other Parliamentary representatives are all working with NEMA (GB) in the effort to help restore Grand Bahama following the devastation by Hurricane Dorian on Monday, September 1, 2019.

Packing winds of 185 miles per hour Hurricane Dorian pounded Grand Bahama for two days as its movement slowed down considerably over the island. Many residents lost their homes due to flooding and high winds.

Once the all clear had been given on Wednesday, September 4, NEMA and the Emergency Center have been busy with the work of restoration of the island.

1st Insert: President of the Senate, Kay Forbes-Smith (center, pink blouse), along with Tammy Mitchell from NEMA (left) look over the list of items expected to be delivered to Grand Bahama on behalf of Royal Caribbean Cruise Line, which arrived on the island on Thursday, September 5, 2019 at Freeport Harbour.  At left, is a team of volunteers from RCCL, who helped to unload the items.

2nd Insert: Crew members and workers of Freeport Harbour helped to unload water donated to NEMA from RCCL as a part of Hurricane Relief efforts.